Vermont Senator Bernie Sanders is skipping the Women’s Convention and heading to hurricane-hit Puerto Rico instead, he announced on Thursday.

The selection of Sanders as a keynote speaker at the annual convention was met with uproar after it was assumed he would be headlining the women’s event, which is themed “Reclaiming our Time.” Convention organizers were lambasted online after they announced Sanders’s participation, and a change.org petition lobbied to have him dropped from the opening act.

But Sanders bowed out of the event himself. In a statement, he said that he felt compelled to head to Puerto Rico, where residents are still struggling after two massive hurricanes caused widespread damage. Most Puerto Ricans still do not have electricity, and 28% continue to lack access to drinkable water one month after Hurricane Maria struck.

“Given the emergency situation in Puerto Rico, I will be traveling there to visit with San Juan Mayor Carmen Yulín Cruz and other officials to determine the best way forward to deal with the devastation the island is experiencing,” Sanders said in his statement. “The U.S. Congress cannot turn its back on the millions of people in Puerto Rico who, four weeks after the hurricane, are still without electricity, food and running water.”

Even before Sanders dropped out, the Women’s Convention organizers, who led the women’s marches against President Donald Trump’s inauguration, tried to quell the outrage. They announced on Tuesday that Michigan Senator Debbie Stabenow would be the opener, and not her male colleague. Senator Sanders was only scheduled to participate in an evening panel discussion, they said.

“We know that it has been a painful week for women across the nation,” the women’s march team said. “We realize that we added to that pain when we announced Senator Sanders as a speaker at the Women’s Convention, and that our announcement gave the impression that he is occupying a central role at the convention. It is important to correct the record.” 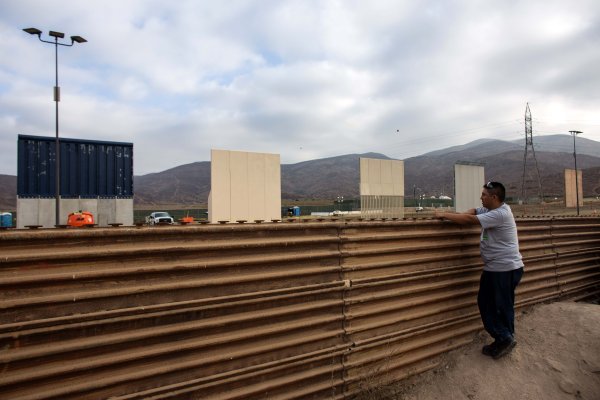 Here's What Trump's Border Wall Could Look Like
Next Up: Editor's Pick