By Julien Toyer and Sonya Dowsett

(MADRID/BARCELONA) — Spain’s central government said on Thursday it would suspend Catalonia’s autonomy and impose direct rule after the region’s leader threatened to go ahead with a formal declaration of independence if Madrid refused to hold talks.

In an act unprecedented since Spain returned to democracy in the late 1970s, Prime Minister Mariano Rajoy said he would hold a special cabinet meeting on Saturday that could trigger the move. The Socialist opposition said it backed the government but suggested the measures should be limited in scope and time.

The war of words increased uncertainty over a standoff that has raised fears of social unrest, cut growth prospects for the euro zone’s fourth-largest economy and rattled the euro.

“If the government continues to impede dialogue and continues with the repression, the Catalan parliament could proceed, if it is considered opportune, to vote on a formal declaration of independence,” Puigdemont said.

Catalonia, which has a distinctive culture and language, triggered Spain’s biggest political crisis for decades with a secession bid it put to a referendum on Oct 1. Only 43% of voters participated but those who did voted overwhelmingly to secede, while opponents of secession mostly stayed home.

Spanish courts have ruled the referendum illegal, but Puigdemont says the result is binding and must be obeyed.

The European Union declined to help mediate, saying the crisis was for Madrid and Barcelona to resolve.

“Member states are clear there is no room or space for any kind of mediation,” European Council President Donald Tusk told a news conference during an EU leaders summit in Brussels.

The regional authorities have not made clear how and when a declaration of independence would take place and whether it would be endorsed by the regional assembly. Some pro-independence lawmakers have said they want to hold a vote in the Catalan parliament to lend it a more solemn character.

Rajoy plans to invoke Article 155 of the 1978 constitution, which allows taking control of a region if it breaks the law.

A senior government source said the exact measures would be agreed on Saturday and probably voted through the upper house Senate on Oct. 30, giving the secessionists a few days of leeway to respond before Madrid takes control.

The regional authorities could use that time to split unilaterally, call elections in the hope of strengthening their mandate, or back down, although this is seen as highly unlikely.

“From the moment the measures are known, the regional government knows what’s going to happen and has a period of time to act until 155 can be acted upon,” the source said.

Spanish stocks, bonds and the euro all suffered in early trade, but recovered, a bounce some strategists attributed to a sense that Madrid had the upper hand in the standoff.

The terms of Article 155 are vague and could spur more wrangling with the restive region.

“The government will use all the tools available to restore as soon as possible the law and the constitutional order, recover peaceful cohabitation between citizens and stop the economic damage that the legal uncertainty is creating,” government spokesman Inigo Mendez de Vigo said in a statement.

Rajoy’s team met members of the socialist party to coordinate their next steps. A spokesman for the Socialists said while they fully stood behind the government they would insist Article 155 is applied in the most proportionate way.

Madrid’s options range from closing down the regional parliament and expelling lawmakers, to a softer and more targeted approach, the government source said. Theoretically, the central administration could take control of the region’s finances and police, and call a snap election.

But some members of the Catalan government have already questioned this interpretation of the constitution, suggesting the stand-off could extend for at least several more days.

Carles Riera, a lawmaker from the pro-independence CUP party whose 10 deputies are vital to Puigdemont’s coalition, said dialogue with the Spanish state now looked impossible, and called on the leader to formalise a declaration of independence.

“From our point of view, the sooner this happens the better,” Riera told Reuters in the Catalan capital Barcelona.

Impatience is also setting in among residents of the port city. Merche, 55, who voted for secession in the referendum, said she was tired of the political to-and-fro.

“People want a resolution. Go for one thing or the other, but leave people in peace to carry on with their routine and their work,” she said, rearranging lettuces on her market stall.

Puigdemont has already defied Rajoy once this week, when he ignored a first deadline to drop the independence campaign and instead called for talks.

Rajoy says the Catalan government has repeatedly broken the law, including when it held the banned referendum and when it made a symbolic declaration of independence on Oct. 10, only to suspend it seconds later.

Puigdemont says a violent police crackdown during the referendum and arrests of pro-independence leaders on charges of sedition show the Spanish state has become authoritarian. 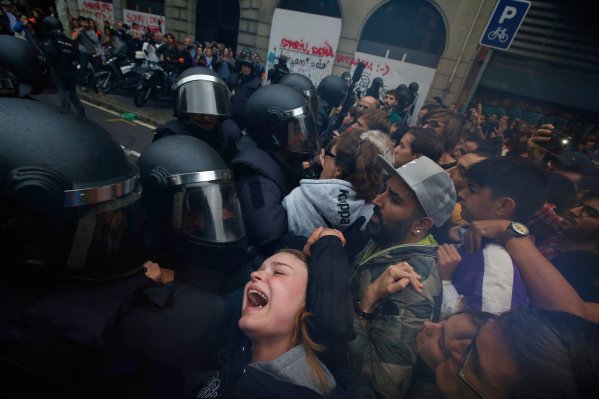 Catalonia Voted to Leave Spain. Now for the Hard Part
Next Up: Editor's Pick