Scott Pruitt, Administrator of the Environmental Protection Agency at the EPA Headquarters in Washington, DC on October 18, 2017.
Stephen Voss for TIME
By Justin Worland

Environmental Protection Agency chief Scott Pruitt questioned the legitimacy of a key scientific document on the dangers of climate change — but he does not plan to formally consider reversing it anytime soon.

The finding — a 2009 EPA document that said man-made climate change harms human health — has had a major impact on EPA policy, driving Obama-era regulations on power plants. Because of a Supreme Court ruling, the document means the EPA must address climate change by regulating carbon-dioxide emissions. In an interview with TIME this week, Pruitt cast doubt on the validity of the EPA finding.

“Did this agency engage in a robust, meaningful discussion with respect to the endangerment that CO2 poses to this country?” Pruitt asked about the 2009 document, known as an “endangerment document.” “I think by any definition of that process they didn’t.”

But Pruitt did not go so far as to say that he would seek to overturn the document’s conclusions in an upcoming reevaluation of how the agency regulates carbon dioxide emissions, as some hardline conservatives had hoped. That means the EPA will remain legally required to reduce carbon emissions.

Still, regardless of those requirements, Pruitt has no intention of implementing strong climate regulations. Instead, he suggested to TIME that he plans to limit the scope of the EPA’s climate rules through legal arguments that sidestep the need to question mainstream climate science. (He declined to rule out formally questioning climate science in the future.)

Pruitt’s primary target is the Obama administration’s Clean Power Plan, which aimed to reduce carbon-dioxide emissions from power plants. Pruitt recently formalized his intent to scrap the Clean Power Plan, and will argue that the EPA does not have the authority to enforce it. That narrow legal argument may not become a rallying point for deniers of climate change, but it is easier to defend in court than a broader case that questions the science of global warming. “A lot of people start with the endangerment finding and the scientific questions about the underpinnings of that,” Pruitt says. “They don’t ask about what authority we have to do it… And both are very important.”

Leaving the endangerment finding untouched means that legally Pruitt needs to replace the Clean Power Plan — or at least begin a process to do so. Speaking to TIME, Pruitt remained silent on the details of a potential replacement, saying that the agency would first evaluate its authority to regulate carbon dioxide emissions. Pruitt is planning separate processes to roll back the rule and figure out how to replace it.

Many environmental experts fear that Pruitt is trying to evade issuing a new rule altogether by dragging out the bureaucratic process. Pruitt offered a mixed message this week, saying that he believes “there is some modest authority…for us to take action” to regulate power plants but also that such authority is “yet to be determined.”

“We’ve been spending many months evaluating Section 111 of the Clean Air Act to ask and answer the question what authority exists,” says Pruitt. “That is ongoing and will be ongoing for months into the future.”

Industry groups have called for the EPA to issue a replacement soon, saying a long process creates uncertainty that’s bad for business. Environmental groups will inevitably sue if Pruitt declines to issue a replacement. The EPA’s 2009 endangerment finding increases their chances of victory.

“Virtually everyone in the business community believes that EPA needs to issue a replacement rule,” Jeff Holmstead, a former senior EPA official under George W. Bush who now represents energy companies, wrote in an email. “They think they would be better off with a reasonable regulation than with no regulation at all.” 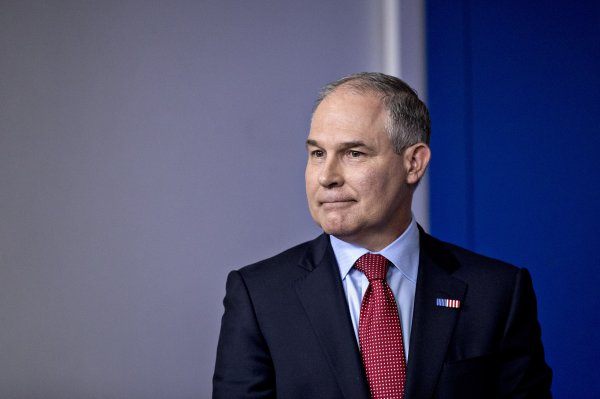 EPA Head Defends Oil and Coal
Next Up: Editor's Pick