White nationalist Richard Spencer’s speech at the University of Florida on Thursday was disrupted by dozens of protesters with raised fists who booed and chanted, “Go home, Spencer.”

Outside, hundreds of protesters gathered in opposition to the speech, holding signs and shouting, “We don’t want your Nazi hate.”

The event was the latest example of a public university grappling with debates over free speech when it comes to visits from controversial far-right speakers and ensuing protests. In August, Spencer organized the “Unite the Right” rally in Charlottesville, Va., which resulted in violence that left one woman dead. And clashes have erupted at Spencer’s other campus events in the past year, including those at Auburn University and Texas A&M University.

Anticipation for the University of Florida speech led Florida Gov. Rick Scott to declare a state of emergency, warning that the “threat of a potential emergency is imminent.”

At a press conference ahead of his speech, Spencer, who has argued for the creation of a “white ethno-state,” defended his previous comments about “peaceful ethnic cleansing” and spoke about white European identity. He criticized the protesters opposed to his presence on campus.

“I think the fact that someone might be uncomfortable with someone who is talking about ideas — that seems to be actually justification for me to be here,” Spencer said, deriding universities as a “nursery school for young adults.”

“It is a place where we need, desperately need, to talk about controversial and, you could say, dangerous ideas,” he said.

Spencer credited the university — a public institution bound by First Amendment rights — with supporting his right to speak.

“For the record, I don’t stand behind racist Richard Spencer. I stand with those who reject and condemn Spencer’s vile and despicable message,” University of Florida President Kent Fuchs said on Twitter in response. 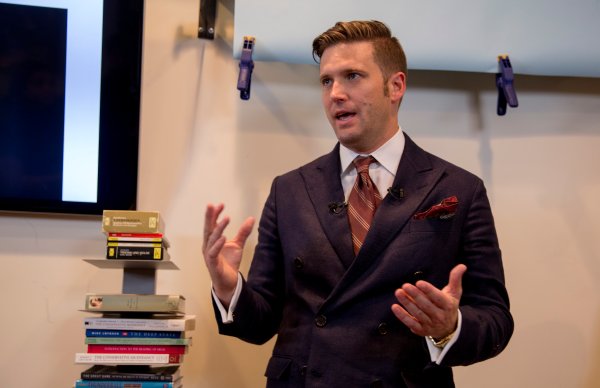 Florida Declares State of Emergency Over Speaker
Next Up: Editor's Pick