Former President George W. Bush expressed concern Thursday over the rise of isolationist sentiment in the United States, claiming the country is suffering from a “crisis of confidence.”

“We’ve seen nationalism distorted into nativism – forgotten the dynamism that immigration has always brought to America. We see a fading confidence in the value of free markets and international trade – forgetting that conflict, instability, and poverty follow in the wake of protectionism. We have seen the return of isolationist sentiments – forgetting that American security is directly threatened by the chaos and despair of distant places, where threats such as terrorism, infectious disease, criminal gangs and drug trafficking tend to emerge,” Bush said, speaking at a national forum on liberty hosted by the George W. Bush institute in New York City. “In all these ways, we need to recall and recover our own identity. Americans have a great advantage: To renew our country, we only need to remember our values.”

The solution, Bush cautioned, was not for the U.S. to retreat internationally, but to retain the reins of leadership. “One strength of free societies is their ability to adapt to economic and social disruptions,” he said. “And that should be our goal: to prepare American workers for new opportunities, to care in practical, empowering ways for those who may feel left behind.”

Bush also implicitly referred to the investigation into Russian interference in the 2016 election, noting that “repressive governments” attempted “a major effort to encourage division in western societies and undermine the legitimacy of elections. ”

Bush’s speech bared similarities to the one his former Republican primary opponent, Arizona Senator John McCain, delivered earlier this week after accepting the Liberty Medal at the U.S. Constitution. In that speech, McCain slammed what he called “some half-baked, spurious nationalism cooked up by people who would rather find scapegoats than solve problems.”

Neither Bush nor McCain directly mentioned President Donald Trump by name. But concern about current United States’ leadership was evident in both set of remarks.

But ultimately, Bush expressed optimism the United States would prevail in its current challenges. “The American spirit does not say we shall manage or we shall make the best of it, it says we shall overcome,” he concluded. “And that is exactly what we are going to do with God’s help.” 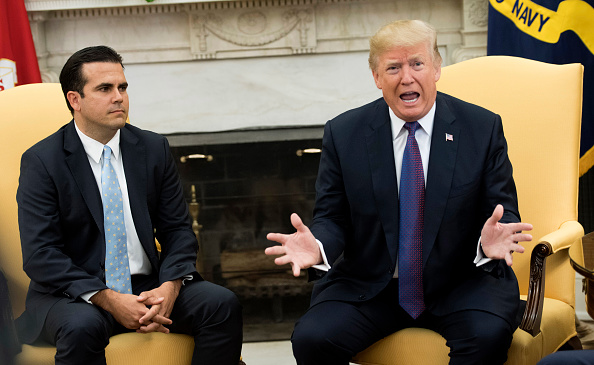 President Trump Gave Himself a ‘10’ for His Response to Puerto Rico
Next Up: Editor's Pick