Rohingya Refugee Children Are in Desperate Need of Aid, the U.N. Says

The U.N. children’s agency said Thursday that violence in Myanmar’s western state of Rakhine is driving as many as 12,000 children across the border into Bangladesh each week, warning that hundreds of thousands are at risk of waterborne disease in overcrowded and unsanitary displacement camps.

Eight weeks into a calamitous crisis on the border between Myanmar and Bangladesh, tired and desperate Rohingya Muslims, young and old, continue their exodus to what is becoming the world’s largest refugee camp. UNICEF says some 60% of arrivals are children, crossing at a rate between 1,200 and 1,800 every day.

“The refugees are still coming, but already we can see the appalling dangers that the children are facing,” the agency’s Bangladesh representative Edouard Beigbeder said in a statement. “Living in the open, with food, safe water and sanitation in short supply, the risk of waterborne and other diseases is palpable.”

More than half a million Rohingya, a persecuted Muslim minority in Buddhist majority Myanmar, have fled across the border since Aug. 25, when the government said Rohingya insurgents fatally attacked state security forces. The Myanmar military responded with a campaign of murder, rape and arson that the U.N. said amounts to ethnic cleansing.

On Monday, after a brief downturn in refugee flows, arrivals surged again as some 10-20,000 turned up near the village of Anjumanpara. Bangladeshi border guards kept them in limbo at the border until Thursday, when they were allowed to move further inland to a sprawling refugee camp where they are now receiving shelter, food and medical care.

Many of the children arrived bloated, naked, and barefoot, and TIME spoke with one woman who undertook the nine-day journey while nine months pregnant. By the time she arrived in Bangladesh, she was too weak to walk and in urgent need of medical care, her feet seared with lacerations after trekking through the hills to escape with her family.

UNICEF said it has found high levels of acute malnutrition among children in the camps, and warned of other hazards such as vulnerability to human traffickers.

The agency has made an urgent appeal for funding ahead of an Oct. 23 pledging conference, when donors will decide where to put their resources. UNICEF has currently secured only 7% of the $76 million it needs to assist displaced Rohingya children over the next six months. 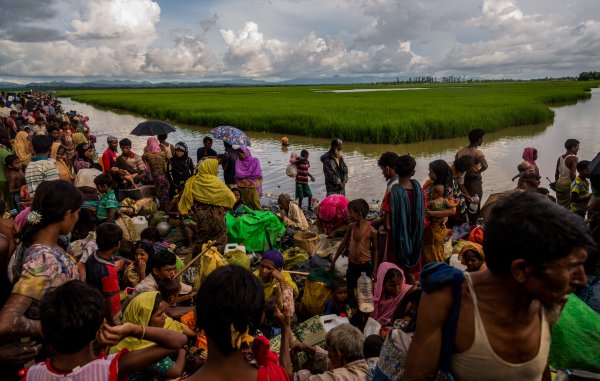 Rohingya Refugees Are Overwhelming Authorities in Bangladesh
Next Up: Editor's Pick