Kids Are Spending More Time On Mobile Devices Than Ever Before

Almost half of young children now have their own tablet, a new report says.

According to the report, which comes from Common Sense Media, those tablets are seeing plenty of use. Kids younger than eight are reportedly spending an average of two hours and 19 minutes per day glued to screens. Roughly 30 percent of that time is spent on mobile devices such as tablets and smartphones. Forty-two percent of youngsters have a personal tablet.

While screen use has held fairly steady over time—kids in 2011 spent two hours and 16 minutes per day looking at screens, for example—the medium of choice has changed dramatically, according to the Common Sense Census. Television is still the most popular screen, but daily time spent watching the tube has dropped by 11 minutes since 2011. During the same time period, meanwhile, mobile device use has exploded from five minutes per day to its current 48 minutes.

Meanwhile, kids are still spending about a half hour per day reading or being read to—and, interestingly enough, the vast majority of that time is spent with print media, not e-readers.

Still, the uptick in mobile usage may be cause for concern. “Mobile device use is more individual, immersive and on-demand, and it influences interpersonal dynamics differently and can be harder to break yourself (or your child) away from,” writes Dr. Jenny Radesky, a pediatrician at the University of Michigan, in an opening letter for the Common Sense Media report. Studies have also linked excessive device use among youth to everything from speech delays to decreased emotional intelligence.

The American Academy of Pediatrics recommends that children between the ages of two and five spend no more than an hour per day on screens, and suggests “consistent limits” for kids older than six. 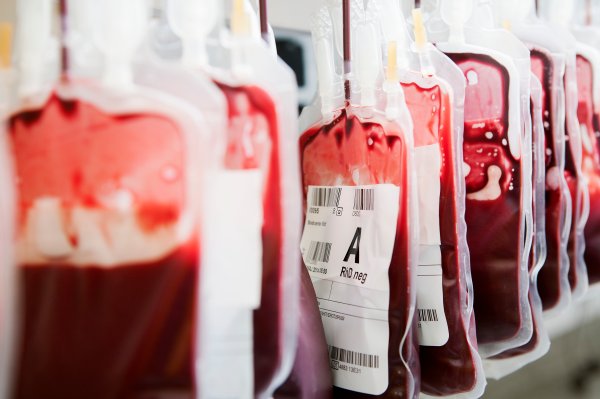 It May Be Risky for Men to Receive Blood Donations From Women Who Have Been Pregnant
Next Up: Editor's Pick