Colin Farrell Finds Darkness in The Killing of a Sacred Deer

Greek filmmaker Yorgos Lanthimos’ style, a kind of deadpan harangue, is ideally something you either love or hate. To be in the middle, to merely respect it, is the harder position. And Lanthimos’ predilection for inflicting cruelty on his characters spills over in his latest, The Killing of a Sacred Deer.

Colin Farrell plays Steven Murphy, a sure-of-himself heart surgeon and the head of a numbingly placid American family. He regularly engages in clinical sex with his wife Anna (Nicole Kidman), an ophthalmologist. His two children, teenager Kim (Raffey Cassidy) and preadolescent Bob (Sunny Suljic), seem blandly normal in every way. But Steven has been secretly meeting with Martin (Barry Keoghan, seen recently in Dunkirk), a mysterious youth with eyes as blank as steel. Steven is affluent and closed off to almost everything most other humans need to worry about. Martin has next to nothing. Yet the boy has a strange power over Steven, and it becomes clear that he’s trying to exact some sort of punishment.

It’s not that The Killing of a Sacred Deer isn’t brainy or ambitious. Dense with layers of biblical lore and Greek tragedy, it’s like a cake that’s impressively tall but also unpalatably dry. It’s an art-house special-ops mission, tiresomely clinical in its sadism. It leaves you feeling like you’ve been lectured to, as if Lanthimos decided that we don’t already know what a vile place the world can be and thus need to be taken by the hand and shown–but with style. Ignore Lanthimos at your peril or at your discretion. You might respect him, but you don’t have to love him. 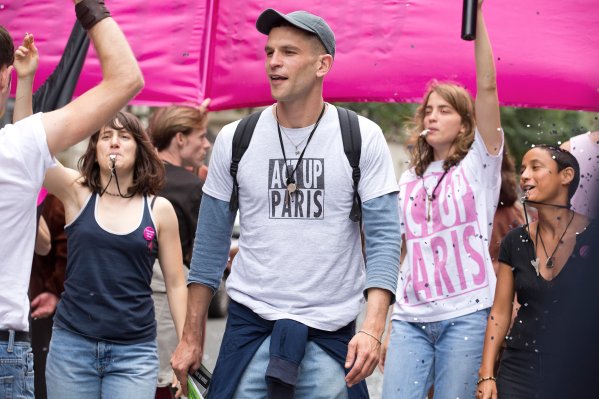 Love Rises Above Politics in Beats Per Minute
Next Up: Editor's Pick