Holding Iraq together without the common enemy of ISIS looming over it was always going to be tough. President Donald Trump is not going to make the task any easier.

The rise of the Islamic State in 2014 forced many factions in Iraqi society to paper over their differences against a common enemy. In the contested areas of Iraqi Kurdistan, Kurdish authorities took control of oil-rich Kirkuk after the Iraqi army fled as ISIS advanced. On Oct. 16, Iraqi forces returned to take back Kirkuk and its surrounding areas by force, in response to Iraqi Kurds’ overwhelmingly voting for independence in an unsanctioned referendum on Sept. 25.

The Iraqi Kurds might feel hard done by. For the past three years their peshmerga fighters, trained and armed by the U.S., have played a pivotal role in beating back ISIS. Their expectation was that in time, they would be rewarded with a homeland of their own, despite the strenuous objections from neighboring Turkey, Syria and Iran, all of whom have sizable Kurdish populations of their own.

The Kurds’ insistence on carrying out a referendum, while understandable, put the U.S. in a bind. Washington opposed the vote for fear it would weaken pro-U.S. Iraqi Prime Minister Haider al-Abadi ahead of elections next year. The U.S. has spent over a decade trying to stabilize the country it invaded in 2003, propping up the central government while also providing aid to Kurdish forces. Hence Trump’s announcement on Oct. 16 that “we’re not taking sides.”

While the rhetoric makes sense, Trump’s decision to decertify Iran’s compliance with the nuclear deal, coupled with his inconstant support for Iraq’s Kurds, have pushed things closer toward an endgame. In recapturing Kirkuk, Iraqi security forces were joined by Shi’ite militias backed by Iran. The Iranians, emboldened by Trump’s nuclear-deal gambit, have every incentive to push the U.S. into these kinds of existential geopolitical dilemmas.

To be fair to Trump, this is not the first time a U.S. President has had to give way to realities on the ground. Obama did virtually the same with the Ukrainians when Vladimir Putin invaded in 2014, leaving Kiev in the lurch. The difference here is that it was Trump’s unilateral decision to provoke Iran that ended up forcing moves in Iraq, much like it was Trump’s unilateral backing of Saudi Arabia that touched off this year’s spat between Qatar and other Gulf monarchies. With allies like these, Iraq’s Kurds might be asking if they really need enemies. 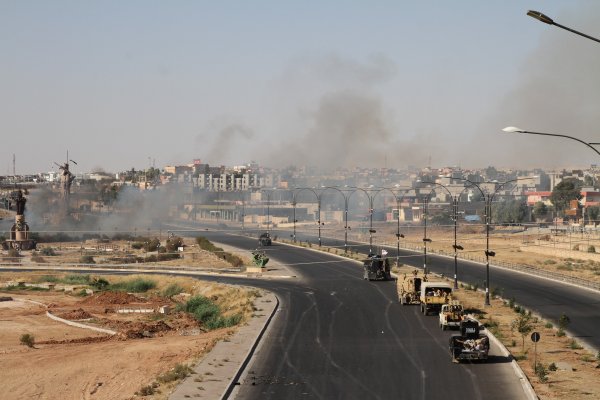