A trail of desperate Rohingya Muslims on the Bangladeshi border, reaching back as far as the eye can see, picked up belongings Thursday morning and began the move to what is fast becoming the world’s largest refugee camp.

Bangladeshi authorities initially kept the crowd waiting in paddy fields since their arrival Monday morning as response teams prepared a place for them at Kutupalong, one of two mega sites that have been home to Rohingya refugees for decades. Today they began the long trek to the encampment.

Vivian Tan, a spokesperson for the U.N.’s refugee agency, tells TIME that all of those who reached the border will be allowed to enter the crowded camps, which already shelter nearly one million Rohingya. Many had fled earlier waves of violence in the 1970s, 1990s and in Oct. 2016.

The UNHCR estimates there are 10,000 to 20,000 people here at Anjumanpara, a village in Palongkhali district, mostly amassed on no man’s land awaiting permission to cross the border. “There may be people who are still coming in, it’s hard to say. We are seeing this expected influx now, and we’ve been preparing for it for a while,” says Tan.

Hundreds of thousands of Rohingya, a persecuted minority from western Myanmar’s Rakhine state, began pouring over the Bangladeshi border in the days after Aug. 25, when Rohingya insurgents launched a deadly attack on state security forces. The Myanmar military responded with a brutal campaign of indiscriminate killing, rape and arson that has pushed more than half of the group’s total population out of the country.

The U.N. has called it a campaign of ethnic cleansing, and global leaders are losing patience with the Myanmar government as it continues to deny the atrocities. On Wednesday, Secretary of State Rex Tillerson pledged to hold Myanmar’s military accountable for the horrendous crimes alleged over the past two months.

The country’s de facto leader, Nobel laureate Aung San Suu Kyi, claims the military operations ceased on Sept. 5, but new arrivals tell TIME they fled their villages between 4 and 14 days ago amid the ongoing terror. Some said soldiers entered their villages and began firing at civilians, others said mobs of ethnic Rakhine Buddhists carrying homemade weapons ransacked homes and burned them down.

“Lots of new Buddhists came to our area and began patrolling with local weapons,” Khaleda Begum, a 50-year-old Rohingya woman from Alishong village in Buthidaung, told TIME on Tuesday as she waited in the sun for the border guards to allow the group to move. She said a Buddhist mob attacked late at night just over a week ago. “They set fire to one side of our village, and we were on the other, so we ran. I brought just enough to survive.”

Bangladesh is now dealing with a humanitarian catastrophe, as more and more refugees arrive on its fields and shores each day. Barefoot, carrying small children and one bottle of water each, they keep walking. They have spent the week waiting through rainy nights and blisteringly hot afternoons after their long exodus, and still it isn’t over. They will be provided shelter, food and medical assistance at the camp, but they face an uncertain future in conditions ripe for disease and despair.

“This is a gigantic task,” said Mohammed Abul Kalam, joint secretary of the Bangladesh Refugee Relief and Repatriation Commission, speaking to TIME in Cox’s Bazar Tuesday. “We’re doing our best, but when it comes to capacity we need support.” 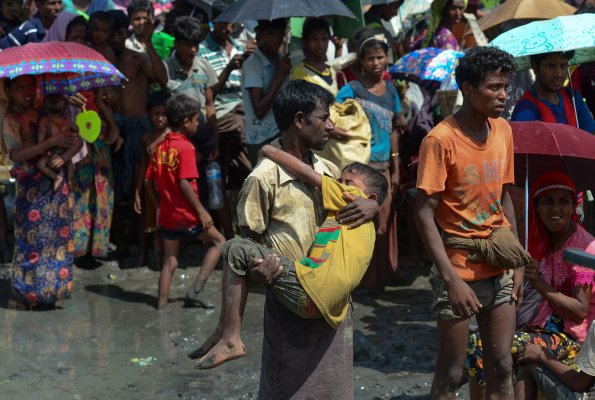 On the Ground in Bangladesh as Rohingya Refugees Arrive
Next Up: Editor's Pick