Calls to Bring U.S. Nuclear Weapons Back to South Korea Are Getting Louder

An expert at a leading Seoul-based think tank says South Korea should advance its capacity to make pre-emptive strikes, adding to opposition party calls to bring nuclear weapons back to check the North’s belligerence.

Choi bemoaned South Korea’s “insufficient defense capabilities,” pointing to the pace at which Pyongyang’s nuclear and missile development programs are advancing. “Redeployment of tactical nuclear arms along with deployment of strategic assets,” would produce “meaningful” results, he said.

The U.S. maintained a cache of nuclear weapons in South Korea until 1991. During the 2016 U.S. presidential campaign, Trump voiced support for the redeployment of U.S. nukes on the peninsula, CNN reports, and in September Senator John McCain said their redeployment was something Washington should consider.

South Korea’s government officially favors non-proliferation and denuclearization and has dismissed the idea of a redeployment.

In August, however, President Moon Jae-in called for an overhaul of military spending that would better equip Seoul to check Pyongyang’s threats, boost its retaliatory capability, and enable it to take offensive action against the North.

The leader of the conservative Liberty Korea Party, South Korea’s main opposition party, has said Seoul needs to break Pyongyang’s “nuclear monopoly” and pursue a “nuclear balance of power” with the North. “Only by deploying tactical [nuclear] weapons on South Korean territory can we negotiate with North Korea on an equal footing,” party leader Hong Joon-pyo told CNN Thursday.

In September South Korean protesters clashed with thousands of police as the U.S. missile defense system known as THAAD was deployed in a village 135miles south of Seoul. 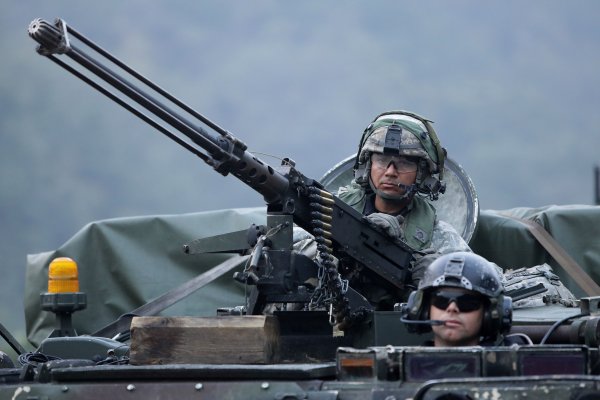 The Military Is Practicing Rapid Evacuations of Americans From South Korea
Next Up: Editor's Pick