The father of a fallen soldier said President Donald Trump offered to send him $25,000 during a condolence call, but that he hasn’t received a check.

Chris Baldridge’s son, Army Cpl. Dillon Baldridge, died in Afghanistan in June, the Washington Post reports. Baldridge says Trump called a few weeks later and they spoke for about 15 minutes. When Baldridge noted he was struggling to make ends meet, while his ex-wife was expected to receive a $100,000 death gratuity from the Pentagon, Trump offered to write a check himself.

“He said, ‘I’m going to write you a check out of my personal account for $25,000,’ and I was just floored,” Baldridge told the Post. “I could not believe he was saying that, and I wish I had it recorded because the man did say this. He said, ‘No other president has ever done something like this,’ but he said, ‘I’m going to do it.’”

When Baldridge later received a condolence letter, he says, “I opened it up and read it, and I was hoping to see a check in there, to be honest. I know it was kind of far-fetched thinking. But I was like, ‘Damn, no check.’ Just a letter saying ‘I’m sorry.’”

A White House spokesperson told the Post, “The check has been sent. It’s disgusting that the media is taking something that should be recognized as a generous and sincere gesture, made privately by the President, and using it to advance the media’s biased agenda.” 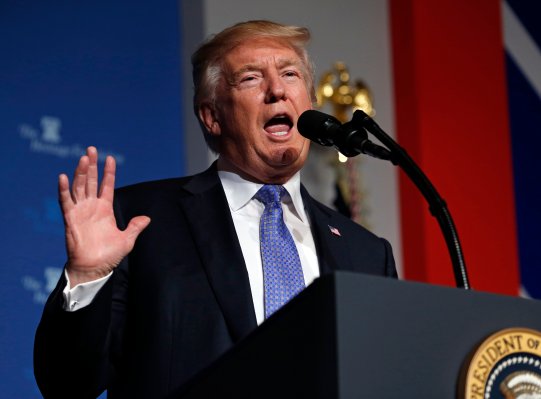