When Amazon announced in September that the Seattle-based company was inviting cities to bid for its second headquarters, there was immediate pressure for metros to apply — and to figure out how to set themselves apart from everyone else keen to attract an estimated 50,000 jobs and $5 billion in investment.

Economic developers around the country have raced to put together proposals ahead of the Oct. 19 deadline, and they’ve touted different traits in the process, whether their locale has no state income tax or is home to thriving research universities. Meanwhile, other local leaders have taken wackier tacks with the hopes of piquing Amazon’s attention and pushing their proposal toward the top of the pile.

Sun Corridor Inc., the economic development organization spearheading the Southwestern city’s bid, sent Amazon a 21-ft. Saguaro cactus, which the company politely declined, saying via Twitter that “we can’t accept gifts (even really cool ones).” The plant, Sun Corridor said, was meant to symbolize that Amazon had room to grow in the area.

Among Amazon’s long wish list of qualities that the winning city will have is a metro area with more than 1 million people. Tucson is one of the smallest of the roughly 50 places that pass that threshold in the U.S. While Sun Corridor Inc. expressed excitement that Amazon acknowledged the cactus — even if the firm did regift it — they’re staying mum about their more serious bid. “We won’t be releasing any details due to the competitive nature of the project,” chief marketing officer Laura Shaw tells TIME.

With hopes of highlighting the Atlanta area, the suburb of Stonecrest proposed de-annexing up to 345 acres of land and naming the new town Amazon, Ga. “There are several major U.S. cities that want Amazon, but none have the branding opportunity we are now offering this visionary company,” Mayor Jason Lary said, according to local reports. Topeka, Kansas once (unsuccessfully) used a similar gambit in an attempt to lure a high-speed internet project to town, changing its name to “Google, Kansas” for a month.

Some locals in Atlanta say the fever surrounding the pitch to be Amazon’s second home reminds them of bidding for the Olympics, which the city successfully did in 1996. “Atlanta’s always been a great city for promoting itself,” says Charlie Battle, an attorney who worked on that bid. His take was that it was the Georgian people who tipped the scales that time. “There’s something real to Southern hospitality,” he says. “It’s just in the DNA, making people feel welcome.”

The mayor of Charlotte declared Oct. 18, the day before the bids are due, to be an official Amazon-themed day in the metro area: #CLTisPrime Day. City leaders promoted that hashtag not just in proclamations but on buses and billboards, too. In a show of solidarity, local owners of those advertising spots donated the space with hopes of helping the message spread.

Many pundits believe that the biggest draw for Amazon will be human capital, pools of highly skilled workers and executives. And Charlotte is home to big banking operations, including Bank of America’s HQ. At one brainstorming session, locals even floated the idea of offering Amazon executives “on loan” from such companies, as a way to help build up the workforce for “HQ2.” Tariq Bokhari, a candidate for city council who helped organize that session, also worked on building an app that taught Alexa to sing the city’s praises.

Amazon positioned the public process of soliciting bids as a way to make sure every metro had a chance to woo the $485 billion company. Intentional or not, it also led to a ton of free advertising, including cases where hopeful politicians actually engaged advertising companies to help them figure out how to impress the e-commerce giant.

That’s what happened in Kansas City, Mo., where the mayor’s office worked with a local ad agency in executing a “five star” scheme. With their help, Mayor Sly James ordered 1,000 items from Amazon, representing 117 products, and wrote five-star reviews for each that doubled as promotions for the Midwestern city. (BBQ was mentioned several times.) Local charities suggested — and received — the items, which ranged from hot-dog Halloween costumes to wind chimes.

Birmingham, Ala., touts the whole package

In recent weeks, locals in Birmingham could find Amazon boxes the size of bread of trucks sitting around town in three separate locations. As in other areas, leaders there also promoted a hashtag, asking residents to snap selfies with the giant boxes and post pictures on social media with the hashtag “#bringAtoB.” The city also installed giant buttons that resemble Amazon Dash’s instant-ordering units. When people press them, promotional tweets are sent out onto the web.

Though cities of all sizes expressed interest in being part of a bid, places like Birmingham are a long shot. Among Amazon’s stated preferences for the new site include a world-class airport with daily flights to places like San Francisco and Seattle, a strong university system and robust mass transit, as well as land for a building bigger than the Mall of America. As the Birmingham Business Journal noted, the city leaves several of those boxes unchecked, even if it does have verve.

The City That Never Sleeps announced that on Oct. 18 several iconic landmarks around the city would be lit up in “Amazon Orange” to highlight the city’s bid, including the Empire State Building. “The case for bringing Amazon’s new headquarters to New York City is simple,” Mayor Bill de Blasio said in a statement. “We are the global capital of commerce, culture and innovation.”

Though New York meets the bulk of the criteria in Amazon’s request for proposals, the city’s hometown paper was skeptical in their own handicapping of which metro area has the best chance of winning HQ2. While the New York Times notes that the city has plenty of tech talent, it also has a rents that are too damn high. The paper’s pick — among favorites ranging from Boston to Dallas — was Denver, a place with a growing tech sector, high quality of life and relatively low cost of living.

The world will found out if they’re right in the next 12 months or so. Amazon has said the company will make its decision in 2018, earlier or later in the year depending on factors like just how many proposals show up at their doors this week. 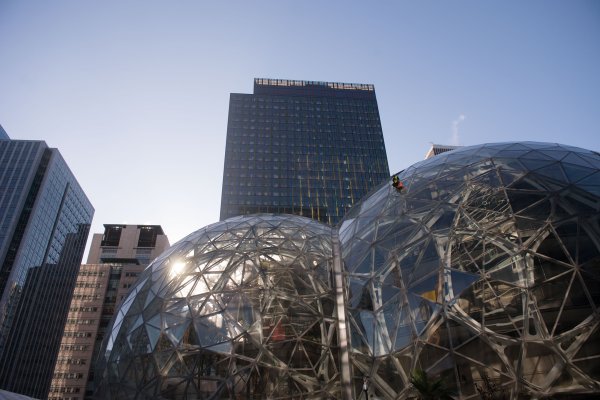 Winning Amazon's New Headquarters Could Come With Hidden Costs
Next Up: Editor's Pick