Democratic attorneys general in 17 states and the District of Columbia filed a lawsuit Tuesday against Education Secretary Betsy DeVos over the department’s decision to block Obama-era protections for students attending for-profit colleges.

The suit argues that the department violated federal law by freezing the “gainful employment rule” without sufficient justification or public input. The rule, which was set to take effect this year, cut off funding to for-profit colleges that burdened students with loans while failing to prepare them for gainful employment.

“What the Department of Education is doing is illegal — not enforcing the rule, kicking the can down the road,” Maryland Attorney General Brian Frosh, who led the lawsuit, told TIME. “But more importantly, what they’re doing is favoring these predatory for-profit institutions over students — and students who are overall extremely vulnerable.”

DeVos had criticized the Obama-era rules as a “muddled process that’s unfair to students and schools” and said she plans to enact different regulations.

DeVos has faced criticism and legal action from Democrats and students since she froze Obama-era regulations on for-profit colleges — including student loan protections and the gainful employment rule — earlier this year. Attorneys general in 18 states and the District of Columbia filed a suit in July demanding that DeVos implement student loan protections.

The Department of Education on Tuesday criticized the new lawsuit as a “legal stunt.”

“This is just the latest in a string of frivolous lawsuits filed by Democratic Attorneys General who are only seeking to score quick political points,” spokesperson Liz Hill said in a statement. “While this Administration, and Secretary DeVos in particular, continue work to replace this broken rule with one that actually protects students, these legal stunts do nothing more than divert time and resources away from that effort.”

But Frosh — who has also filed lawsuits against the Trump Administration over Deferred Action for Childhood Arrivals, EPA regulations and anti-corruption violations — called the department’s action “a clear violation of the law.” 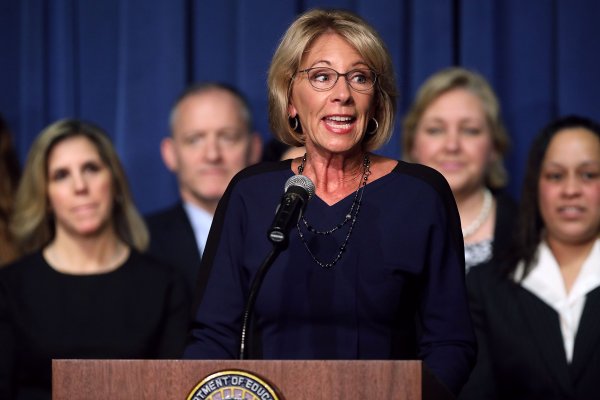