‘Me Too’ Just Gave Society a Conscience

Cognitive dissonance is a hell of a drug. It smothers the senses of societies that claim to despise sexual predators and yet keep giving them awards and electing them to office. Right now, all over the world, in the wake of the Harvey Weinstein accusations, women and girls are coming together in stunning numbers to finally name the men who have been hurting and humiliating them for so long. Resistance to rape culture is going viral. And polite society is expressing a certain amount of skepticism.

Can this really have been happening to so many women and girls? If so, why didn’t they speak out before? Aren’t we all overreacting here? We know there are men like Weinstein, but he’s an outlier, a rare breed of human monster — surely! Of course, we’ve all heard rumors. We all know an old-fashioned guy who gets handsy after a few drinks. But surely, we think, he can’t be an abuser. He’s a colleague, a family member, a friend. Can it really be true?

Yes. I’m sorry, but yes, it can. This is neither a trend, nor an over-reaction. This is a rebellion.

It’s a rebellion because it involves risk. It takes fantastic courage to name your abuser. Naming your abuser is an act of defiance. It means overcoming every lesson you’ve ever internalized about what happens to women who make trouble. To speak honestly about sexual violence, to call rape and assault by their proper names, is to defy the authority of men by denying them ignorance of the damage they do. And there are always consequences for that defiance.

If you stand up to your rapist, you risk being iced out of your industry, called a liar and a lunatic, being shamed and humiliated in public and punished in private. That’s how structures of oppression work — by excusing almost everyone involved from really knowing what they’re doing. The reason that so many men can honestly claim not to have known the scale and extent of sexual abuse is that women and children have protected them from that knowledge. That’s what rape culture is. It’s not just a system that allows rapists to get away with it. It’s a system that allows them to feel okay about it afterwards.

On the scale of convenient self-delusion, “We didn’t know that every industry on earth was riddled with sexual violence” falls somewhere between, “That guy will never make it to the White House” and, “It’s just a rash.” I’m sure that a lot of us, on some level, didn’t really know. Not really knowing is the favorite hobby of almost every citizen of an oppressive society. I’m reminded of a passage in They Thought They Were Free, Milton Mayer’s devastating account of the lives of former Nazi party members in small town Germany. To a man, none of them had known what was being done to the Jews. They’d heard rumors, sure. They’d noticed their neighbors disappearing. But nobody knew. And at the same time, everybody knew. They did not know because they chose not to know, because it was convenient not to connect the dots, and then, as one former Nazi told Mayer, “One day, too late, your principles, if you were ever sensible of them, all rush in upon you. The burden of self-deception has grown too heavy… Suddenly it all comes down, all at once. You see what you are, what you have done, or, more accurately, what you haven’t done, for that was all that was required of most of us: that we do nothing.”

So nobody knew. And at the same time, everyone knew. Speaking out was too painful, and the risk was too great, so everyone looked away. Until they couldn’t look away anymore.

Let me put this another way. Think about this moment in Hollywood terms. There’s a moment toward the end of every classic protest movie when — just as it looks like the baddies have won, that they’ve finally crushed that secret part inside our hero that wants the world to be different — suddenly, one ordinary person stands up and says, no, this is not right. They say: “I am Spartacus.” They say: “Oh, captain, my captain.” They put down their tools. They drop their guns. The camera closes in on this person’s terrified face as they realize the consequences of the crazy, stupid thing they just did.

And then, somewhere in the crowd, a stranger stands up and says something that means “Me, too.” Then another person. Then another and another, and suddenly everyone is getting to their feet, and the camera pulls back as the whole restive crowd rises to say, “Me, too.” And me. All of us. Things have been so terribly wrong for so very long, and we’ve had enough. That chill of excitement runs down your spine, and the music soars as you watch all those people realize that they’re not alone anymore. Everyone knows that bit of the movie. Well, that’s the bit of the movie we’re in. What happens next is up to us. 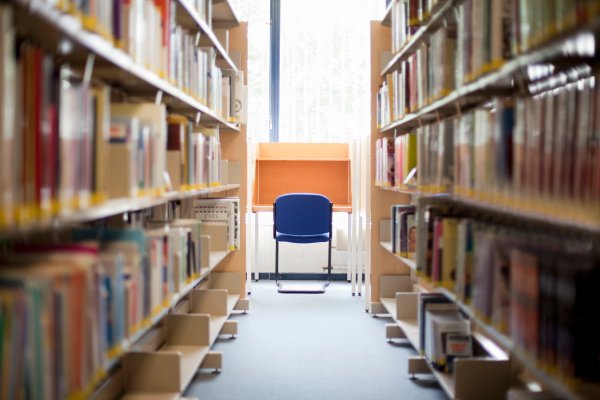 How Libraries Discriminate Against Undocumented Children
Next Up: Editor's Pick