Amy Sedaris on Her New Show, Teaming Up With Stephen Colbert and Dealing With Unwanted Guests

Amy Sedaris’ madcap new comedy show, At Home with Amy Sedaris, welcomes you and guest stars like Nick Kroll and Rachel Dratch to a surreal world where potato snacks need a lot of glue and most things are better with shrimp.

Best known as Jerri Blank from Stranger With Candy, the comedian has recently appeared on shows like Broad City and Bojack Horseman. But now she’s finally the star of the show her brain was always wired for. The eternal Girl Scout who wrote funny homemaking books like Simple Times: Crafts for Poor People and I Like You: Hospitality Under the Influence created this series with Paul Dinello, who worked on Strangers. So she brings her authentic love of cooking and crafting to plenty of absurd ideas you shouldn’t try at home.

TIME talked to Sedaris about why this was the decidedly un-precious show she thought was missing, the enduring appeal of Jerri Blank and partnering up with her old co-star Stephen Colbert.

TIME: Be honest. Did you just do this show because you needed to get the word out about why we should put shrimp on more things?

Yes! That was why. And I really am allergic to fish. When I had an allergic reaction, it was the funniest thing I’ve ever seen. My face blew up and when I put baby powder on top of it , it was extra funny. I always knew I needed to do something with shellfish, and I’m so glad we got it in.

The direction the show goes is really surprising. How did some of the funniest ideas come about?

A lot of the most surreal things came from Paul Dinello’s mind, and all of us trying to make each other laugh. And the humor comes from knowing a little bit about what I’m talking about with crafting and cooking.

You really live for this homemaking stuff, but this show seems to subvert the idealized home concepts we’re used to. Why do we need that now?

So I don’t really watch the shows that are out there now. I saw Barefoot Contesssa for the first time, and I’ve done Martha Stewart’s show. I just don’t relate to those shows though. I don’t have the gadgets or the counter space. Sometimes they’re things no one makes, and I can’t afford half the ingredients. I felt outside of them. I didn’t feel like there was a show out there for people who don’t have the skills. I’m the one gluing googly eyes on a pine cones like a Girl Scout. I like more folk art type things. That’s what appeals to me.

What do you make of the popularity of aspirational lifestyle sites like GOOP?

When it’s that expensive, it’s just what those people can afford. I like Milk of Magnesia and home remedies that really work. Even in school, I never wanted the designer thing. I wanted the knockoff. I didn’t care what everybody else had, and I still feel that way. I’m simple.

Women on both cooking and comedy shows are so often the matriarch. You play a single — and sexually active — host. Was that important to you?

That’s so interesting. It was always important that with any part that I played, I never wanted to be in a relationship. Even at Second City, people wanted to do a scene in a bridal shop or on a date. I was like, what? I just don’t like that kinda stuff. I don’t want to have a husband! Why do I have to have a husband? Maybe it’s because I’m not married. I just wanted it to be about me. That way, you can sleep with all kinds of people, as I end up doing in the show.

You can go dark. So can your brother David. Where does that come from?

I like being able to go there, it doesn’t have to be in everything I do. I love to ability to be willing to do the inappropriate, horrible thing. It doesn’t mean I’m going to act on it or be that person. I like that I can just think it. Everyone in the family was always making funny observations.

With Jerri Blank on Strangers With Candy, you set a precedent for a new kind of hero that influenced pop culture. Is Jerri still a touchstone you return to with your new characters on this show?

Jerri’s in me. I go into Jerri all the time on the show. I do in real life too. She pops out. I like that Jerri was such a misfit and an outcast. I like how naïve she was. She was like the perfect little afterschool special at her age. She was desperate for love and anybody to like her, and that’s always perfect for humor.

And you also have fun in the kitchen with your old Strangers With Candy co-star Stephen Colbert on the show. What’s working with him like now?

My relationship with Colbert is mainly email because he’s so busy. I go to his Christmas party every year. But I said, I can’t do the show without you, you gotta come on! And Paul Dinello wrote that scene for him. It’s so fun to work with him. It’s like we all slip back into ourselves from our Second City days. It’s comfortable because we know our strengths, like a private club.

Entertainment question time. You can have anyone at your cocktail party dead or alive. Who’s invited?

Probably mostly dead people. Juliette Low, who founded the Girl Scouts. I’d be interested to see how she’d like her steak served. I’d serve everybody strip steaks, the temperature people want tells you a lot about them. I’d have my mom and my sister invited, and maybe [Barbra] Streisand if she was back in 1963. I’d like to capture her then because I was obsessed with her growing up.

How do you deal with an unwanted guest?

Ugh, that’s the worst. I would just do everything to get them out of there. If they overstay their welcome, I have no problem telling them it’s time to leave because that’s probably a pattern with them.

What about a meddling in-law?

Ugh that would be a drag. Luckily I don’t have a meddling person in my life so I haven’t that had situation. I would probably keep changing my number and keep forgetting it.

At Home with Amy Sedaris premieres October 24 on truTV. 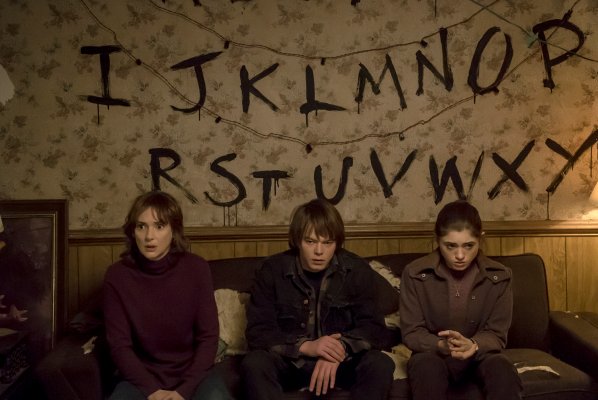 12 TV Shows and Movies You Need to Watch If You’re a Stranger Things Super Fan
Next Up: Editor's Pick