French Women Have Their Own Anti-Sexual Harassment Campaign: 'Expose Your Pig'

In this file photo, a woman poses with a sign reading "A unhappy memory - as I came to this protest, several people whistled at me and called me a'dog' " as she takes part in a protest against sexual and verbal harassment, on April 25, 2014, in Paris.
Franck Fife—AFP/Getty Images
By Laignee Barron

French women have come up with a new campaign against sexual harassers, assaulters and predators: #BalanceTonPorc – or, expose your pig.

The social media hashtag has elicited a groundswell of responses over the past week, with women around the country flooding Facebook and Twitter with their personal accounts of inappropriate sexual propositions, often from men in powerful positions.

“‘You have big breasts. You’re my kind of woman. I’ll make you enjoy the night,'” French journalist Sandra Muller Tweeted (in French) on Friday. Her sharing of the alleged words of a former boss kicked off the #BalanceTonPorc torrent.

The campaign echoes the #MeToo hashtag occurring across the Atlantic and started by actor Alyssa Milano, who called on social media users to use the hashtag #MeToo to illustrate just how pervasive lecherous behavior is in the wake of harassment, assault and rape allegations against disgraced Hollywood mogul Harvey Weinstein.

The ballooning scandal around Weinstein’s alleged treatment of several actresses, including four French stars, has reinvigorated a debate in France about how to end sexualized violence against women, including verbal mistreatment.

The nation’s Secretary of State for Equality between Women and Men, Marlene Schiappa, is working on legislation that would criminalize street harassment, including an on the spot fine of a yet-to-be-determined amount for wolf-whistling.

In France, where sexual harassment is already punishable by up to two years in prison and a €30,000 ($35,000) fine, there is currently no enforceable definition of street harassment, or catcalling.

A drafting taskforce of MPs, police officials and lawyers are currently working to define it ahead of a planned vote on the new law next year.

Schiappa doesn’t seem to think that will be too hard to pinpoint.

“We know very well at what point we start feeling intimidated, unsafe or harassed in the street,” she told RTL radio on Monday.

She gave examples of men talking too close to a woman’s face, following a woman down the street or asking for her number 17 times.

In addition to cracking down on street predation, the law would toughen punishments on sex with minors and extend by an additional decade the statute of limitations on reporting rape cases that occurred when the victim was a minor.

Schiappa said she was moved by the revelations shared in the #BlanceTonPorc campaign, including an account shared by a personal friend, and emphasized the need for the new law.

Several countries have already made catcalling and other forms of verbal sexual abuse a crime. In Portugal, the offense is punishable with a €120 ($142) fine. Belgium made catcalling illegal in 2014 with penalties including a one-year jail sentence and fine of €1,000 ($1,200). And in New Zealand, street harassers can be dinged with a fine of up to $1,000. 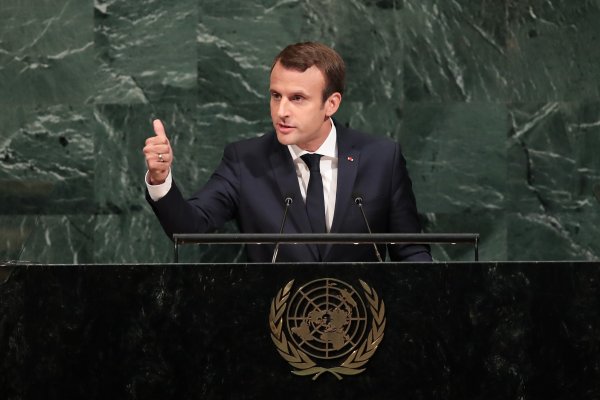 Macron: The Paris Climate Deal Is Not Up for Debate
Next Up: Editor's Pick