There’s no doubt Ariana Grande has an impressive voice. And today, we can add another accolade to her name: impressive stool-perching abilities.

This isn’t a new thing, but it’s only now that her unusual talent is getting both the viral scrutiny and respect that it deserves. After an online comic resurfaced the cover of Grande’s 2014 album My Everything — which is a photo of the beloved vocalist posing precariously atop a tiny stool — he made an ill-fated attempt to recreate the look.

“I’ve done the research and there’s no way her a– is sitting on that stool,” Twitter user Jesse McLaren insisted with his photos. The resulting side-by-side comparison pics went viral. But not so fast with that verdict, McLaren. After inspiring plenty of copycats to give the rather acrobatic photo shoot a whirl, they debunked his inability, insisting it was physically possibly (although rather uncomfortable). Then, even Grande herself got into the conversation.

“Next week on Mythbusters,” she shot back. Lesson learned: do not mess with the Grande — or doubt the Dangerous Woman‘s photo-posing prowess. She’s a pro. 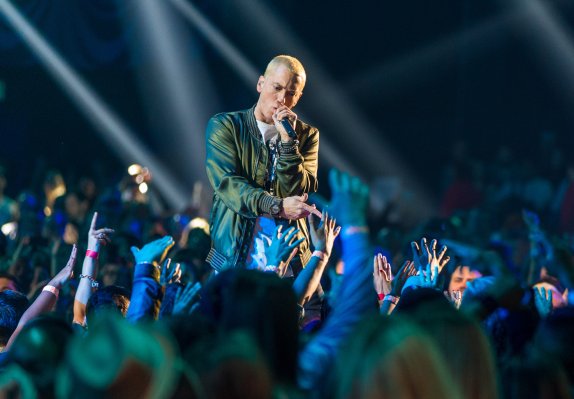 Eminem's Anti-Trump Rap Video Is the Only Awkward Pause Meme the Internet Ever Needs
Next Up: Editor's Pick