The peshmerga left along with tens of thousands of fleeing civilians that jammed the road from Kirkuk to Erbil. Resident burnt tires and shouted “shame on you,” while some civilians pointed guns as the peshmerga departed.

By mid-afternoon, the Kurds had lost control of Kirkuk, Iraq’s most contested city. Young Arab men hung an Iraqi flag from a bridge as American-made Humvees rolled through the streets, closely followed by pick-up trucks filled with fighters from the mostly-Shia Popular Mobilization Forces.

“Now all Kirkuk can see this flag,” said Abdullah Gubal as he hung it over a billboard for the Patriotic Union of Kurdistan (PUK), the leading Kurdish political party in Kirkuk.

Claimed by both the Iraqi government in Baghdad and the Kurdish regional authority in Erbil, the fate of Kirkuk should have been decided by referendum a decade ago. Kurds took control of Kirkuk when Iraqi forces fled ISIS’s advance in June of 2014. The Kurdish leadership vowed they wouldn’t hand the city back. But Kirkuk’s government buildings and Kurdish party headquarters were virtual empty Monday and residents said they saw Kurdish officials and forces leave before the Iraqi forces advanced.

“They sold Kirkuk,” said Ahmad Mohamed holding his Kalashnikov at the edge of the city with a group of angry Kurdish volunteer fighters pledging to go back and push the Iraqi forces out.

“This is shame on the Kurdish leaders and most of the Kurdish commanders in Kirkuk,” said Wyra Ali. “They didn’t fire one bullet from their weapons. They should defended Kirkuk, but they didn’t.”

Hiwa Osman, a Kurdish analyst, says the peshmerga retreat may have been the result of both confusion and internal division. Since the Kurds’ controversial referendum on sovereignty last month, the division between the Kurdistan Democratic Party, the party of Kurdish President Masoud Barzani, and the PUK has been growing and many here believe the PUK struck a deal to hand over Kirkuk to Baghdad.

“One camp said stay at home,” says Osman. “The other camp said take your weapons and go in to the street.”

In the end, Iraqi forces and allied militias met little resistance in the urban center after clashes with forces outside the city. Overnight Iraqi forces took control of the areas outside the city and by afternoon American-trained elite forces had taken the Kurdish flag off the governors’ office and raised the Iraqi one instead.

Monday’s Iraqi advance on Kirkuk was spurred by the controversial Kurdish referendum on September 25. Washington and Baghdad both urged the Kurdish leadership to postpone the vote, but they went ahead. Since then, Baghdad has been increasing pressure on the Kurds’ semi-autonomous region — halting international flights out of the Kurds’ two international airports and threatening to take control of the borders.

Kurds were outnumbered, out-armed and also unsupported by the ally they share with Baghdad. Both the Iraqi forces entering the city today and the Kurdish forces that left, are funded, trained and equipped by the U.S. and allies in the fight against ISIS, putting Washington in difficult position.

“Where are the American planes?” asked another man. The pop of gunfire could be heard in the distance as the volunteer Kurdish fighters talked about heading in to Kirkuk.
President Donald Trump said Monday that the U.S. would not take sides in the Kurdish-Iraqi dispute. But Jennifer Cafarella, senior analyst at the Institute for the Study of War, says it’s this position and American tunnel vision on the fight against ISIS that allowed this situation to escalate.

“The U.S. is in a terrible position because we remained focused on the very narrow anti-ISIS mission,” says Cafarella, explaining the U.S. needed to be more engaged before these tensions between the Iraqis and the Kurds spiraled. She also cautions that while U.S. has not been involved, the Iranians have. “Now the U.S. is sitting on the sidelines asking for everyone to deescalate.” 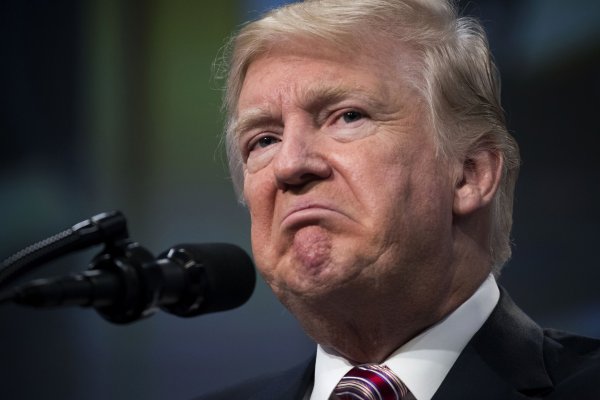 Every U.S. President Faces a Major Crisis. What Will Trump's Be?
Next Up: Editor's Pick