The Walking Dead returned with a bang for its eighth season Sunday night, as Alexandria, the Hilltop and the Kingdom escalated the conflict with Negan and the Saviors to all-out war. Before leading the attack on the Sanctuary, Rick delivered one of his classic impassioned speeches about the meaning of the group’s mission.

“We found each other and that bigger world is ours by right,” he said. “And if we’ve come together, all of us, it’s that much more true. It’s ours by right. Any person who would live in peace and fairness, who would find common ground, they’re right too. But those who use and take and kill to carve out the world and make it theirs alone, we end them. We don’t celebrate it. We don’t have shame about it either. There’s only one person who has to die and I will kill him myself. I will.”

However, there were also a series of cryptic flash-forwards interspersed with the present-day battle scenes that featured a much older Rick waking up in his home with Michonne, Carl and Judith followed by a wildly distressed Rick alone in an unclear location. “My mercy prevails over my wrath,” the tearful Rick whispers near the end of the episode.

The old-man Rick sequence was teased in the trailer for the season that premiered at San Diego Comic-Con and led fans to speculate that the show intended to mirror the time-jump that takes place in the Walking Dead comic books following the war with Negan. But judging by the setup of the premiere, it seems more likely that it is only Rick’s vision of what could have been if he and his family had been able to live in peace. 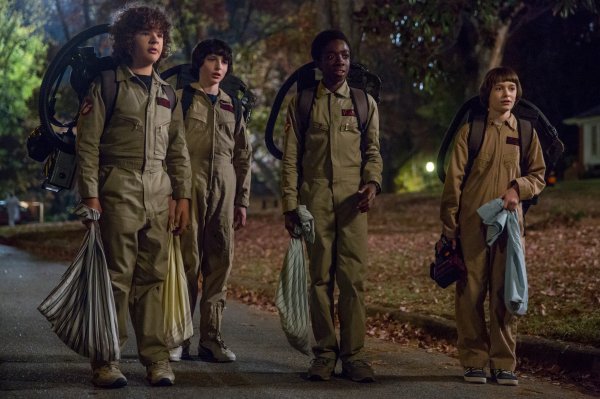 It's Time to Party Like You're Upside Down. The Stranger Things Season 2 Soundtrack Is Here
Next Up: Editor's Pick