Where Does the 'Thumbs-Up' Gesture Really Come From?

It’s a widely recognized gesture: fingers curled into the palm, thumb stretched out, pointing skyward. But what’s the history of the gesture and how did it come to mean “yes” or “O.K.”?

First off, the idea that the up- or downturned thumb originated as a gesture that would save or cost a gladiator’s life in Ancient Rome — an idea popularized by the movie Gladiator — isn’t quite right. It’s not that gestures wouldn’t have been used to communicate such ideas, but rather that the Romans used a wide visual vocabulary in which the meanings of certain movements were different from their modern implications. The thumbs-up sign that today means “O.K.” in that lexicon expressed disapproval.

“We don’t have videotapes of people from antiquity. We have some sculptural references but it’s mostly verbal references,” says Anthony Corbeill, a professor of Latin at the University of Virginia, who wrote a book on gestures in ancient Rome. “Sparing is pressing the thumb to the top of the fist and death is a thumbs-up. In other words, it’s the opposite of what we think.”

Historical confusion about that thumb-pressing gesture exposes just how difficult it can be to track the evolution of body language. The Latin term for the gesture of approval, Corbeill explains, is pollices premere, which means “press your thumbs” and has been described by Pliny the Elder as a common gesture of good wishes. But that doesn’t help much. “The verb premere in latin is just as ambiguous as ‘press’ in English,” he says. “A thumb can press or be pressed, it works both ways.”

Corbeill located an example of what exactly the gesture might look in Nîmes, in southern France, when he found an appliqué medallion that shows a scene from a gladiatorial battle. “What’s great about these is that they often have text accompanying them, so what you see very clearly is two gladiators fighting to a standstill. There’s two referees around them breaking up the battle and up above it says, in Latin, STANTES MISSI, which means ‘let the men who are still standing be released,'” he says. “And right underneath, one of the referees is pressing his thumb. He’s got a fist with his thumb pressing down on it.”

So the crowd didn’t the decide the fate of the gladiator, but rather a referee in the arena who would use that gesture to communicate a decision about whether the fighter should be spared. A second relief in Munich from the 1st century A.D. confirmed Corbeill’s conclusion, showing the same gesture in the same context, and a 4th century riddle also implies that meaning when it describes a storm being kept at bay by a thumb “pressed” to keep liquid in a straw.

And what about the gesture for the death blow? Here things are in some ways even trickier, as there is no definite visual representation of the movement.

Two textual descriptions of a gladiatorial battle, from the poets Juvenal and Prudentius, both reference the pollice verso or pollice converso, the “turned” thumb, as the signal for death. “This is the reason often historians have thought of the thumb turned down,” Corbeille says, but there’s evidence that the turn would have gone in the other direction.

For example, the word for turning also means turning a limb in question on the joint, but doing the modern thumbs-down gesture involves turning the wrist, not the thumb. “‘Turning the thumb’ is turning the thumb up [from that closed fist],” he says, “and you’ve got the ‘up’ gesture.”

Another reason we know the thumbs-up was the kill signal was a gesture known as the infestus pollex or hostile thumb, which is mentioned in texts but, again, isn’t pictured. In antiquity, says Corbeill, “the thumb was hostile in the same way the middle finger was hostile, and it was a threat, just like it is now.” There’s a poem that describes a crowd gesturing towards a gladiator with an unfriendly or hostile thumb, and then the same phrase is used in other contexts where it clearly means the upturned thumb.

So how did the meaning get swapped around?

In the intervening years, the thumbs-up gesture was mostly mentioned in reference to the Latin. The thumb turned, extending from the hand, was translated from Latin as a sign of “disapprobation” in a number of instances that the Oxford English Dictionary records. From the 1600s until the early 1900s, that’s the primary dichotomy of thumbs: bent up (death) or down (life).

Then, in 1872 the popular and influential painter Jean-Léon Gérôme, well, turned things upside-down a bit. His famous painting “Pollice Verso” depicts a crowded arena looking down on a few gladiators, only one of whom is still standing, foot pressed to the throat of one of his fallen combatants. Almost everyone in the crowd has their arm out, thumb pointed down to the ground. Despite being known for his historical accuracy, Gérôme got the gesture wrong: his title indicates the “turned thumb” but his painting shows the “thumbs down,” which was not actually one of the ancient options. The image was reportedly a source of inspiration when Ridley Scott directed Gladiator.

But, while the painting helps explain confusion over Roman history, it doesn’t actually explain where modern usage comes from.

“The whole ‘Roman arena’ explanation that is so often given, appears to be largely irrelevant,” wrote Desmond Morris, a zoologist who collaborated with psychologists in his 1979 book Gestures, Their Origins and Distribution, which explored the topic in Europe and the Mediterranean. They surveyed 1,200 participants from 40 locations to better understand how the gesture was understood, and found that though 738 of them agreed on the positive meaning (approximately “O.K.”), there were a few secondary meanings (the number one, a sexual insult and hitch-hiking among them) and many Italians thought of it as “a ‘new thing’ imported by the American G.I.s during the war.” Many even called it “The American O.K.”

In other words, the very people who might have been expected to be most familiar with a gesture that supposedly originated where they live saw it as a recent, foreign addition.

It’s not entirely clear where those Americans got the gesture, but some speculate it was used for a pilot to communicate with the person starting a propeller in early pre-flight checks. The Oxford English Dictionary records the first positive meaning of “thumbs-up” in Over the Top, a popular 1917 book by Arthur Guy Empey, an American who served in the British army in the first World War, about his experiences at war. Here it’s described as a slang phrase in use by his British counterparts: “Thumbs up, Tommy’s expression which means ‘everything is fine with me.'”

In the 1930s the phrase shows up occasionally in TIME’s pages, and in both the OED citations and TIME annals it gains popularity during World War II.

As the American usage of a thumbs-up as “O.K.” expanded in the 20th Century, older negative meanings remained in some areas of the world. But with Internet giants like YouTube and Facebook using a small thumbs-up for ‘like’ and a thumbs down for ‘dislike,’ the two gestures — thousands of years after thumbs were a matter of life and death — may now have acquired a near-universal meaning. 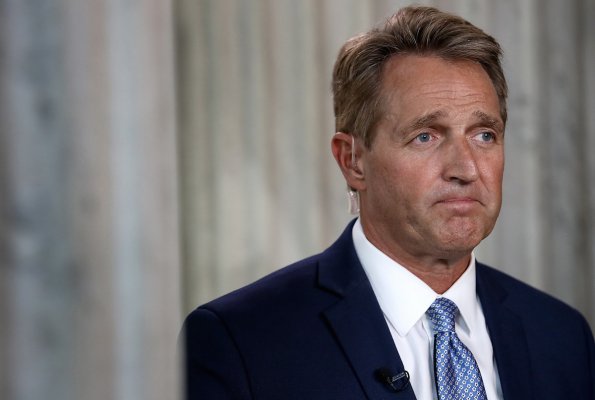 The Story Behind Jeff Flake's Teddy Roosevelt Quote on Why Criticizing the President Matters
Next Up: Editor's Pick