Google on Tuesday launched a new Doodle on its homepage celebrating the life and career of Selena Quintanilla, the Tejano singer known for hits like “Dreaming of You,” “I Could Fall in Love,” and “Bidi Bidi Bom Bom.” Quintanilla was shot and killed by the former president of her fan club in 1995.

The new Doodle illustrates the story of Quintanilla’s life through an animated video that shows her singing at home as a young girl, performing in cafes and at weddings, and finally in the center of a large stage and jamming on a tour bus. The brief video is set to one of Quintanilla’s most recognizable songs, “Bidi Bidi Bom Bom.” Google is launching the Doodle on the anniversary of Quintanilla’s first studio album, “Selena,” which debuted 28 years ago. In addition to the Doodle, Google will be rolling out a new exhibit for the late singer on its Arts & Culture website.

Quintanilla recorded her first song in Spanish when she was eight years old and started a band at the age of nine. She spent many of her teenage years on the road and landed a contract with recording giant EMI in 1989. Her album Live earned her a Grammy for the Best Mexican-American Album category in 1994.

Perla Campos, a marketing manager for Google’s Doodle team and project lead for this Doodle, said the Doodle has been planned for almost two years. Google has experimented with various Doodle types over the years, ranging from interactive games to GIFs and pictures, but Campos says video always felt like the right medium for Quintanilla. “For the people who don’t really know her, this was an opportunity to really tell her story,” she said. “Pretty early on, we decided that video was the right way to go.”

Read more: What It’s Really Like to be a Google Doodler

The Quintanilla-inspired Doodle comes after Google’s homepage artwork has been criticized in the past for its lack of diversity. A report from advocacy group SPARK Movement found in 2014 that 62% of people featured in Google Doodles from 2010 through 2013 were white men. Then in 2015, some took issue with a Veteran’s Day-themed Doodle for being too diverse.

When deciding on new Doodles, Campos says the team considers feedback from a variety of sources within the company, including employees in Local Doodle Manager roles, who are essentially cultural consultants for Doodles located in different countries around the world. Campos has been championing for a Doodle to honor Quintanilla for years, particularly because she can relate to the late singer. “I’ve never seen myself on the Google homepage,” Campos says. “I know that’s probably the case for a lot of people.” 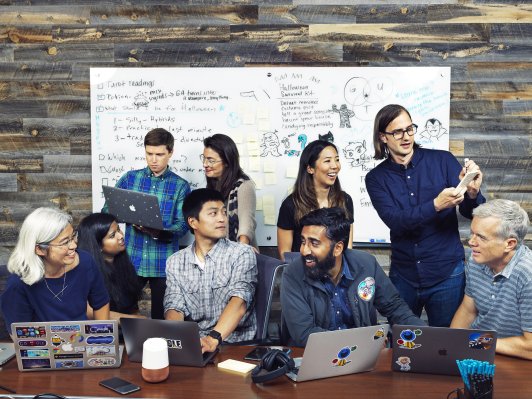 Google Wants to Give Your Computer a Personality
Next Up: Editor's Pick