President Trump indicated Monday that he may sign off on a “short-term fix” to the Affordable Care Act being put together by Democratic and Republican senators.

Speaking at a Cabinet meeting at the White House, Trump appeared to reference a bipartisan proposal from Sens. Patty Murray and Lamar Alexander, arguing that it was being pushed along by his decision to end “cost-sharing reduction” payments to insurers.

“We’re working on some kind of a short-term fix prior to the Republicans getting together, maybe with some Democrats … to fix healthcare permanently,” he said.

Last week, Trump signed an an executive order that could give Americans access to cheaper plans that offer less coverage and announced the end of the insurer payments, which are designed to lower insurance costs for Americans buying on the Obamacare exchanges.

On Monday, Trump said those actions had ensured that Obamacare was “dead,” which he felt would force lawmakers to negotiate.

“They’re right now having emergency meetings to get a short-term fix of healthcare where premiums don’t have to double and triple every year like they’ve been doing under Obamacare,” he said. “Because Obamacare is finished. It’s dead. It’s gone. It’s no longer — you shouldn’t even mention. It’s gone. There is no such thing as Obamacare anymore.”

But the Murray-Alexander negotiations were happening before Trump decided to “blow up” the Affordable Care Act. In September, the Senate committee on Health, Education, Labor and Pensions held four hearings featuring key stakeholders including bipartisan governors, state insurance commissioners and heads of clinics, to discuss ways to stabilize the insurance marketplaces. The goal of their plan would be to make payments to insurers over a short-period of time while also giving states more flexibility to craft and approve their own insurance policies.

The committee’s chairman and ranking member, Alexander and Murray, were working on the outlines of a deal when Republicans announced they were trying their hand at repeal again. So, when the proposal from Republican Sens. Lindsey Graham of South Carolina and Bill Cassidy of Louisiana was presented, Alexander paused the negotiations. When that bill failed, the Alexander-Murray talks resumed.

On Sunday, the Wall Street Journal reported that the plan is expected to be released within days, but a Hill aide says they do not yet have a timeline for the announcement. In a phone call on Saturday, Trump discussed the effort with Alexander.

Once the deal is released, getting it through Congress likely won’t be an easy task. Conservatives have long pilloried cost-sharing payments and the president’s own budget director, Mick Mulvaney, has said his boss will not support a Alexander-Murray bill unless a deal on some of his major agenda items comes with it.

“If the straight-up question is: Is the president interested in continuing what he sees as corporate welfare and bailouts for the insurance companies? No,” Mulvaney told Politico last week. Yet, some Republicans have signaled support for the bipartisan deal.

Republican Sen. Susan Collins of Maine, who has cast pivotal votes against repeal efforts, was critical of the President’s recent moves in an interview with ABC’s “This Week” and said it was time for Congress to act. “Congress needs to step in and I hope the president will take a look at what we’re doing,” she said.

Cassidy also said in an interview with “Fox News Sunday” that he wants a short-term funding solution to pass in Congress. “We absolutely have to think about that family around the kitchen table, which is why I think Congress should pass them,” he said.

Whatever comes of the deal, it will come too late to affect the 2018 marketplaces, where insurers have already set their rates for the year. 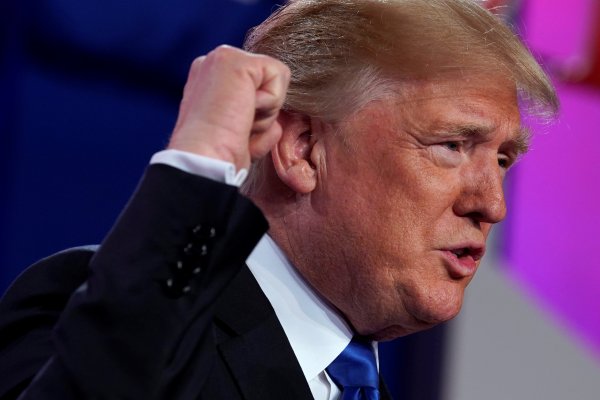 Trump Brags About Drop in Health Insurance Stocks
Next Up: Editor's Pick