The Skies Over the U.K. Turned Red Today. Here's Why

As an enormous Atlantic storm batters Ireland, a related phenomenon is turning heads further east over in the United Kingdom. There, the sun has turned a deep red color, casting orange light over the south of the country.

A Met Office spokeswoman told TIME this was caused by winds spinning in an anticlockwise direction around Hurricane Ophelia as it formed over the ocean. These winds have brought north sand from the Sahara desert and dust from wildfires burning in northern Spain and Portugal, along with an unseasonably warm temperature.

Just like the way sunsets are sometimes red, excess particles in the atmosphere can change the colour of the sun in the daytime. These particles scatter light particles they come into contact with, reflecting the blue end of the spectrum back into space and leaving only red light to penetrate the lower reaches of the atmosphere.

Some Brits took to Twitter to express their reactions on Monday afternoon. References to apocalyptic scenarios dominated: 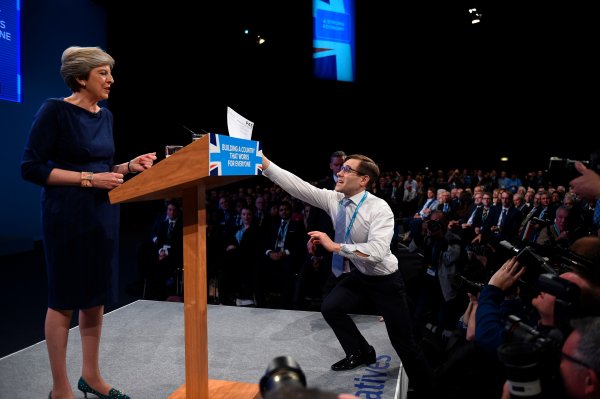 The Prankster who Interrupted Theresa May’s Speech Has Struck Before
Next Up: Editor's Pick