More than 300 people are feared dead with hundreds injured in a pair of bomb blasts that rocked Somalia‘s capital of Mogadishu on Saturday.

Police said a truck bomb exploded outside a hotel near the Ministry of Foreign Affairs in the crowded K5 intersection. Two hours later, another explosion rattled the Medina district, which houses Somali National University. The attacks claimed more than 300 lives and injured another 300, according to the Associated Press, making it the deadliest attack in Somalia’s history and one of the worst in the world in recent years. The toll is expected to rise as excavations of the blast sites continue.

Who carried out the atrocity?

The attacks are believed to have been carried out by al Shabaab, an Islamist group with links to al-Qaeda, which has waged an insurgency against Somalia’s fragile U.N.-backed government since 2007, which is riven with internal clan schisms. The group, whose name means “the youth“, hopes to impose a strict interpretation of Islamic sharia law. It has received less attention than other terrorist organizations, and its operations have largely been confined to Somalia and its neighbors. The group has also vowed to expel any members allied to the Islamic State.

But hasn’t fighting died down in Somalia?

The most intense fighting has subsided since Somalian forces allied with African Union peacekeepers drove al Shabaab out of Mogadishu in 2011. But the group has since carried out several high-profile attacks in East Africa, including an assault on Kenya’s upscale Westgate shopping mall in 2013 that killed 67, as well as assaults on Somali military bases that have included suicide bombers. On Saturday, the group also seized the town of Bariire, 31 miles from Mogadishu.

Isn’t the U.S. involved in the conflict?

The U.S. mostly pulled out of Somalia after the “Black Hawk Down” incident in 1993, when 19 American soldiers were killed and two helicopters shot down over Mogadishu. But hundreds of American Special Operations forces remained in the country, training Somali and African Union forces and participating in raids. In May, one American Navy SEAL was killed in a shoot-out with al Shabaab, the first U.S. casualty since 1994. 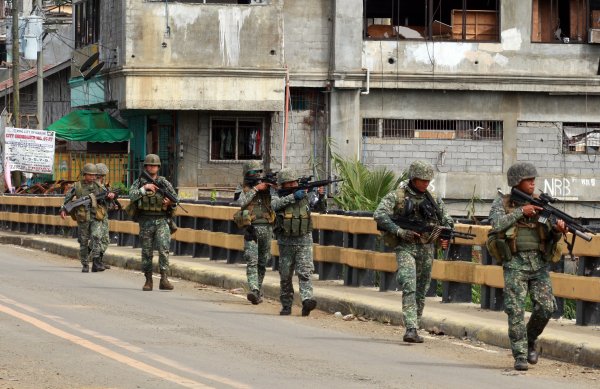 Top ISIS Leaders Slain in the Philippines
Next Up: Editor's Pick