James Corden apologized on Sunday following backlash against the poorly received jokes he made while emceeing the annual amFAR gala in Beverly Hills.

“To be clear, sexual assault is no laughing matter,” the British comedian wrote in a sequence of tweets. “I was not trying to make light of Harvey’s inexcusable behavior, but to shame him, the abuser, not his victims. I am truly sorry for anyone offended, that was never my intention.”

While hosting the AIDS fundraiser, Corden joked, “This is a beautiful room, this is a beautiful night here in L.A. It is so beautiful that Harvey Weinstein has already asked tonight up to his hotel room to give him a massage,” People reports, referring to several allegations against the disgraced movie producer.

Several celebrities were quick to denounce Corden’s jokes, with reactions from dismay to total disgust.

Actress Rose McGowan claimed last Friday that Weinstein raped her, adding to the mounting allegations of sexual harassment and assault against the Hollywood mogul.

Weinstein denies all allegations of rape and sexual assault. 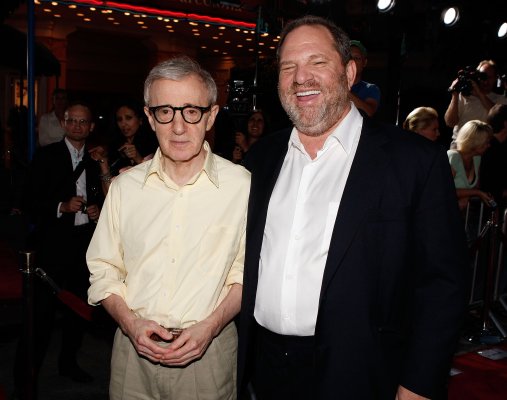 Woody Allen: You Don’t Want a Hollywood ‘Witch Hunt’ in Wake of Harvey Weinstein Scandal
Next Up: Editor's Pick