By Center for Public Integrity / Ashley Balcerzak and Dave Levinthal

On one end, Trump, both by choice and circumstance, remains tethered to his 2016 presidential election effort. A federal investigation is probing whether he or his political aides colluded with Russians, and Trump himself frequently skewers his Democratic foil, Hillary Clinton, as if he didn’t defeat her in November. Trump’s campaign committee this summer spent more than $1 million on legal bills, disclosures show — much ostensibly stemming from the Russia controversy.

All the while, Trump is racing forward with unprecedented haste to win re-election in 2020. He’s conducting campaign rallies and raising millions of dollars in cash despite no one of stature — save, perhaps, for Rep. John Delaney, D-Md. — yet running against him.

Here’s a by-the-numbers look at some of the more intriguing, telling and odd figures the Center for Public Integrity discovered in the latest round of campaign finance filings for Trump and other federal politicos:

$95,241: Amount Trump’s campaign spent from July 1 through Sept. 30 on businesses starting with the name “Trump.”

4: Minimum number of major 2016 presidential candidates with zero debt, including Trump, Carly Fiorina, Ben Carson and Ted Cruz. (Clinton’s campaign, which reported no debt earlier this year, had yet to file an updated disclosure Sunday afternoon.)

14: Number of municipal governments and public safety agencies Sen. Bernie Sanders’ presidential campaign committee paid to settle disputed debts stemming from Sanders campaign rallies. Sanders’ committee, as of Sept. 30, still owed nine more municipalities or agencies a combined $305,103, and a Sanders spokesperson could not immediately be reached for comment. The presidential campaigns of Trump and Clinton also continue to dodge numerous police protection bills. But unlike Sanders’ campaign, Trump and Clinton don’t acknowledge owing the money despite protestations from their municipal and law enforcement creditors.

$700: Amount the campaign of Sen. Joni Ernst, R-Iowa, spent to rent a hay bale. That’s a lot less than the $14,500 her campaign had to pay the FEC to settle a recent election law violation case.

88: Percentage $2.9 million worth donations to of Sen. Claire McCaskill, D-Mo., that came from small donations under $100, according to her campaign. McCaskill could face a tough re-election campaign next year as a Democrat in a state Trump decisively won.

$0: Amount actor and Trump supporter Antonio Sabato Jr. received from Trump for his run for the U.S. House, where he’s challenging Rep. Julia Brownley for her California seat. He raised a mere $41,855 so far this year through September. Brownley raised eight times that just through the end of June.

Unknown: How much Sen. Robert Menendez, D-N.J., raised this summer while facing trial on federal corruption charges. Menendez has been actively fundraising for his re-election in 2018 campaign despite his legal woes. But because Senate candidates file their campaign finance disclosures on paper — not electronically as House and presidential candidates do — it’ll be several more days until they reveal their fundraising figures.

Carrie Levine contributed to this report 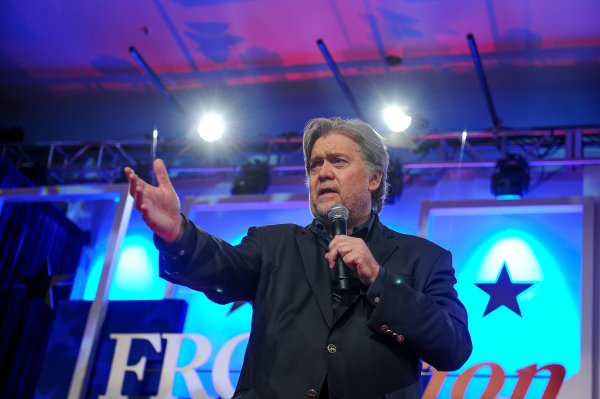 Steve Bannon Tears Into GOP Agenda
Next Up: Editor's Pick