'My Ride or Die.' Woman Flees California Wildfires on a Bike With Her 70-Pound Dog in a Duffel Bag

A California woman fled the scene of wildfires in her neighborhood using a bike with her 70-pound dog tucked in a duffel bag by her side.

College student Natasha Wallace was on her way home from studying late Monday night when she saw the series of fires closing in on her neighborhood in Santa Rosa, according to local channel Fox 40.

But she didn’t want to evacuate the area without her 4-year-old pit bull, Bentley.

“I would never part ways with my dog. Ever,” Wallace told Fox. “That’s my ride or die. Oh my God, literally.”

So Wallace decided to put him in her car and leave the area, she said, but found herself trapped between other cars within minutes.

“It was coming faster than I could leave in traffic, so I went back and got my bike,” Wallace said.

That made transporting Bentley difficult, though. So she grabbed a duffel bag she could sling around her body and instructed Bentley to get inside, she told Fox.

“So I grabbed my dog and I told him, ‘Hey man, this is serious, you need to just sit in the bag.’ And he, he hopped right in,” Wallace explained to the network.

She said she managed to make it several miles down the road ahead of the fire before a man in a truck saw her and pulled over to give her and Bentley a ride.

“I just want to say thank you to him. Paul Johnson,” Wallace told Fox, adding that she’s lucky to be alive, as her neighborhood was completely destroyed by the wildfire. “You don’t even see a resemblance of what it used to be.”

At least 35 people have died as a result of the wildfires that have ravaged northern California in recent weeks. 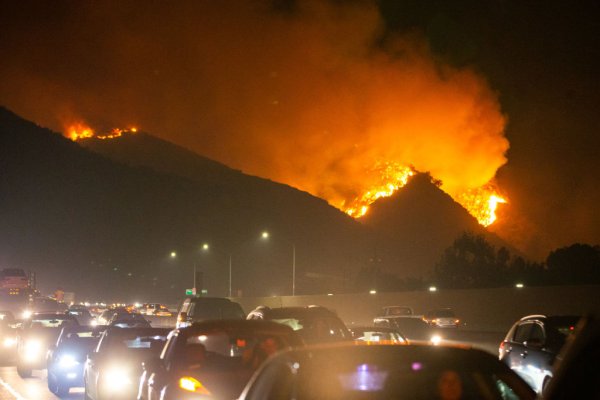