President Trump Had a Busy Week. Catch Up With What Mattered in 5 Minutes

It’s been a busy week in Washington, D.C., with President Trump taking action on everything from health care to Iran.

The House of Representatives passed $36.5 billion in aid for Puerto Rico and parts of California hit by wildfires, reauthorized the Federal Aviation Administration and gave tax relief to victims of hurricanes Harvey, Irma and Maria.

But the real action was at the White House, where Trump took several actions to undo the legacy of his predecessor, President Obama.

Here’s a quick look at what happened and how much it matters.

What happened? On Friday, President Trump will announce that he is not certifying that Iran is in compliance with the nuclear deal that President Obama negotiated.

What does that mean? Though Trump promised to “rip up” the deal as a candidate, this isn’t exactly that. The president is saying Iran is not upholding the “spirit” of the deal, but his Administration is not walking away from it.

What’s the bottom line? While Trump wanted to scrap the deal, key officials — including the Defense Secretary and the Secretary of State — reportedly warned against doing that. So, Trump is passing the buck to the Congress, which must now decide whether or not sanctions will be reimposed. Congress is deeply divided on the issue and could choose not to act.

What happened? Two things, really. First, Trump signed an executive order that could allow people to access cheaper insurance, though those plans will likely cover less. Later on Thursday, the Trump Administration announced it would not continue funding subsidies to the insurance market. Those subsidies help keep insurance costs low for poorer Americans.

What does that mean? Politically, the President is viewing these moves as a win on his goal of repealing the Affordable Care Act. On Friday, he called them major steps toward scrapping the Affordable Care Act, which the Republican Congress has repeatedly failed to repeal, in an address to conservative voters. But, they could mean millions of people will not be able to afford their insurance this year.

What’s the bottom line? The executive order’s changes could take a while to affect people and the insurance marketplace. The elimination of cost-sharing reduction payments will not. The Congressional Budget Office estimates that the cost of silver level plans would increase by an average of 20% in 2018 and 25% by 2020. According to CBO, 5% of the population could have no access to marketplace insurance that same year. The change could also increase the federal deficit by an estimated $194 billion over 10 years.

What happened? The situation in Puerto Rico remains dire—only an estimated 10-16% of the island has power some 3 weeks after the hurricane—but on Thursday the president appeared to suggest federal workers could be pulled away from the U.S. territory in tweeting that they couldn’t stay “forever.” The House of Representatives approved $36.5 billion in aid funding for the territory and other areas of the U.S. impacted by natural disasters.

What does it mean? The president’s tweets sparked a fierce backlash from Democrats on Capitol Hill and the mayor of San Juan, who has been highly critical of the federal government’s response to the disaster. Mayor Carmen Yulín Cruz told CNN that the president was acting like a “hater-in-chief” rather than a commander-in-chief. “This isn’t personal,” she said. “This isn’t politics. This is about saving lives.”

Bottom line: Lives are at risk in Puerto Rico. Saving people and helping the island rebuild should be the focus. By Friday, the President appeared to backtrack tweeting that the “will always be with” the people there.

What happened? The White House released an outline of all of the hardline immigration policies the Administration wants passed in exchange for any deal to protect undocumented immigrants brought to the U.S. as children. The list included a border wall, stricter requirements for those seeking asylum, more law enforcement and a mandatory immigration check for workers known as E-verify.

What does it mean? The demands pose a direct threat to ongoing negotiations over a replacement for the Deferred Action for Childhood Arrivals program, which the President began phasing out at the direction of his Attorney General in September. Trump gave Congress a March deadline for a fix. After that point there will be no protections against deportation for immigrants enrolled in the program.

What’s the bottom line? The President appears willing to offer Congress, and the immigrants, a bit of leeway. Republican Sen. James Lankford of Oklahoma, who has introduced a bill to protect the young undocumented immigrants, said that the President told him he was willing to give the Congress more time.

“The president’s comment to me was that, ‘We put a six-month deadline out there. Let’s work it out. If we can’t get it worked out in six months, we’ll give it some more time, but we’ve got to get this worked out legislatively,’ ” Lankford told constituents at a town hall, according to the Washington Post. 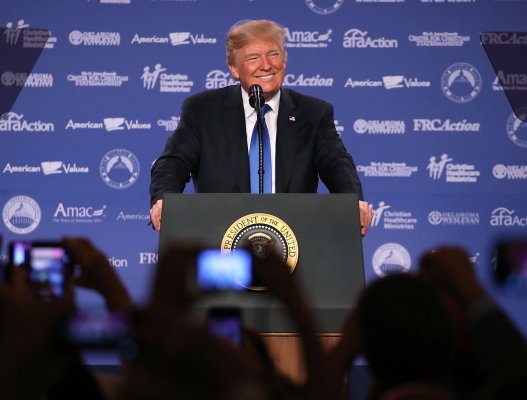