If any citizens are interested in the whereabouts of Interior Secretary Ryan Zinke, some unusual flags outside his agency’s headquarters may offer some information—for those that know how to decode them.

Zinke has revived an obscure military tradition, according to the Washington Post, that involves staffers raising and lowering a special secretarial flag whenever he enters or leaves the building.

The flag, which features the Interior Department’s bison seal on a blue banner with seven white stars for the agency’s bureaus, flies over the building whenever Zinke is present. If only Deputy Secretary David Bernhardt is in the office, a different flag is flown, according to the Post.

A spokesperson for the Department of the Interior told the Post that the Navy tradition is “a major sign of transparency.”

“Ryan Zinke is proud and honored to lead the Department of the Interior, and is restoring honor and tradition to the department, whether it’s flying the flag when he is in garrison or restoring traditional access to public lands,” press secretary Heather Swift said, according to the Post.

Zinke is a former Navy SEAL commander and a former congressman from Montana, who has already drawn attention and criticism with some of his choices since being appointed to President Donald Trump’s Cabinet.

He rode on horseback to his first day in office, for example, and has commissioned coins with his name on them to give out as gifts. Recently, the secretary has also come under investigation after he took taxpayer-funded charter flights that appeared to involve political appearances.

No other Cabinet secretaries in Trump’s administration follow Zinke’s flag ritual, according to the Post, and the President does not signify when he is present in the White House. The personal flags do have a long military history, and marking an official’s presence is still done in the military, but that has not carried over to government employees in the past. 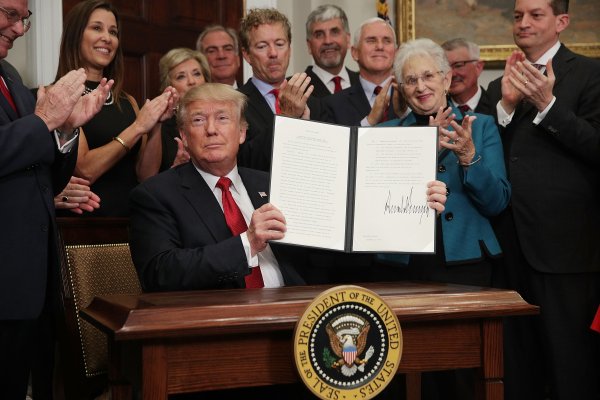