'We Always Rise.' California Winemakers Are Determined to Rebuild After Fires

Napa winemaker Clayton Kirchhoff drove down a winding road this week, past singed power lines swinging in the air and houses that had been reduced to little more than rubble beside a swimming pool. Farmers on one property counted their sheep to see how many were left, as big silver tankers carted wine out of the area, one of many in California that had been ravaged by fire since Sunday night. Kirchhoff, who lost his home in the flames, was headed for White Rock Vineyards, an estate where grapes have been grown since before Prohibition — and where, on Wednesday morning, flames were still licking smoldering tree stumps. Right now it “feels like everything is in slow motion,” he says.

The recent outbreak of wildfires in California is one of the worst the state has ever seen. As of Thursday, more than 8,000 firefighters were tackling 21 fires, which had already consumed 3,500 structures and led to the death of at least 29 people. Emergency officials worked to evacuate more than 20,000 from their homes, many of them in counties famed for making wine to the north of San Francisco.

Several wineries in Napa and Sonoma blazed to the ground. As flames spread, winemakers were forced to leave grapes unpicked at the end of harvest season and abandon vats of fermenting fruit that they typically tend with great care. Over recent days, responders have struggled to contain fires in the area, and evacuation orders have kept coming. That has left the many people who keep the area’s $26 billion wine industry humming — from farmers to tasting-room owners— at a loss to assess the damage, even as they prepare to rebuild.

“It’s not what you expect during harvest,” says White Rock spokesperson Heather Conlin, “to be on the run.”

The Vandendriessche family that has made wines at White Rock Vineyards for the past 40 years says they’re thankful everyone in their family is safe. They have also lost a lot: two family homes on the property, barns, a chicken coop, a lab and a kitchen, winery equipment and their main wine library. Crates stacked in front of the wooden doors that guarded examples of every vintage they’ve ever made caught fire, turning cases of White Rock chardonnay and claret into piles of broken glass. With hopes of saving what was left, Kirchhoff was racing to tend the surviving wine fermentations, hoping none would spoil and turn into vinegar. He was also reeling from the impact of what had happened. “My bed was right in the fire zone,” he says.

Happily for White Rock, as with many other vineyards, most of the vines looked to be in good shape. While many wine-making facilities are just as vulnerable as homes with wooden frames, vineyards themselves can act as excellent firebreaks, says Jennifer Putnam of the Napa Valley Grapegrowers Association. There is typically little grass or ground cover to burn underneath the vines and the plants themselves are full of moisture. “Vineyards have saved a lot of homes,” she says, and maybe lives, too.

She still anticipates damage given that vineyards make up about 10% of the county’s acreage. Agricultural officials had deployed to survey the fields in the days after the fire, while others consulted satellite imagery. But no clear picture had yet emerged. “The smoke is so thick, even if you drive up and down, you can’t get a grasp of what’s been damaged and what hasn’t been,” says Caleb Mosley, a viticulturist who oversees farming for several vineyards through Michael Wolf Vineyard Services. He says each situation is different in Napa: some winery owners have plots all over the county, some have just one. Some have crop insurance that will protect them and power to keep temperatures controlled even if they’re isolated from their land. Some do not.

The fires hit after the “big push” to harvest most grapes, with many estimating that about 80% of the fruit had already been picked. A fire two weeks earlier would have been much more devastating for the 2017 vintage, Mosley says. But with valuable Cabernet Sauvignon left on the vines, many growers were making tough decisions about whether to send workers out into the ashy air to pick grapes that might be ruined by “smoke taint” anyway.

How much of the product makes it this year could be literally a “million dollar question” for White Rock, Conlin says. And the region is facing much bigger losses: not just from spoiled wine or shriveled grapes, but from losses of tourism income during what is usually a busy time of the year. Some people in Napa and Sonoma lost both their homes and jobs overnight, and as people in the region tried to locate loved ones displaced by the fires, most businesses in downtown Napa had shut their doors on Wednesday.

As long lines of people waited near neighborhoods so that emergency responders could escort them into evacuation zones, where they could retrieve medication or pets, few wandered on normally busy streets. People who had filled trash bags with their possessions tossed them into the trunks of their cars, and many who braved the streets wore masks to protect their lungs. Standing almost anywhere felt like being on the wrong side of a campfire during a windy evening.

In one tasting room that was still serving customers, eight people had sidled up to try local wines. The establishment, Vintner’s Collective, had been destroyed in an earthquake that rocked the Napa economy three years ago. “Only a year ago we finally got back on our feet, and this thing happens. It’s insane,” says owner Garret Murphy. Groups have been canceling trips and big events planned at his business for a month or more down the line. He worries that air quality concerns might keep people away even longer than the specter of a quake did. Napa will need time to assess “the damage of people, the psyche, and the actual economy of the community,” he says. “But we always rise.”

The family of White Rock, like many others in the region, sounded similarly defiant notes, saying the region has overcome hell and high water before. Yes, some vintages are probably lost forever, Conlin says, but they’re working now to ship out and sell the wine they have already been aging for years: “And we’re going get back to work and rebuild as soon as we can.”

Some visitors were also pushing ahead despite the smoke. One couple at the Vintner’s Collective bar had come from Calgary, Alberta for their honeymoon, a region that suffered its own wildfires this summer. Though Joanna and Devon Pipke had second thoughts when they rented a car in San Francisco and found themselves traveling “the same direction as all the emergency vehicles,” they decided to come to Napa anyway. “It’s very sensitive for the population,” Joanna says, “but if someone’s going to be open, you want to go and bring them your money.” Each time they leave their hotel, they take bottles of water, their phone chargers and their passports, just in case the fire has reached their inn while they’re out. And on Wednesday, they were sipping some Longfellow Wines cabernet. 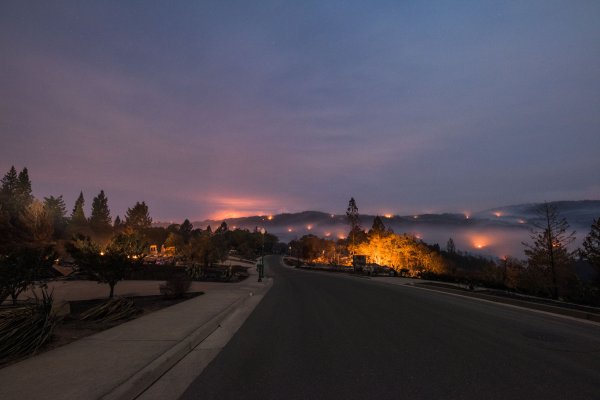 California’s Wildfires Are Only Getting Worse
Next Up: Editor's Pick