Harvey Weinstein and What Happens Next

Harvey Weinstein attends the 'Lion' premiere and opening ceremony of the 12th Zurich Film Festival at Kino Corso on Sept. 22, 2016 in Zurich.
Alexander Koerner—Getty Images
Ideas
By Jill Filipovic
Filipovic is a lawyer and writer.

After decades of operating with impunity as one of the most powerful men in entertainment, Harvey Weinstein has been brought down by a flood of chilling sexual harassment and assault claims, more of which may yet come to light. Power seems to have been his noxious aphrodisiac. Power was why some women acceded and others clammed up, why his employees helped facilitate his assaults and why so many in Hollywood looked the other way for decades. Power was the means, the motive and the cover-up. And power is exactly what he has lost, in a downfall that spans two coasts, several industries and dozens of klieg-lit names.

Weinstein spent decades building his fiefdom on the grounds of a pervasive “see something, say nothing” culture of capitulation. But at the same time, and apparently beyond his view, women were inching their way toward greater social, political and professional power. How fitting that it is their voices breaking the silence and shattering Hollywood’s glass houses. In the rubble of Weinstein’s empire, we find artifacts divulging so much about our values, our culture and ourselves. The story they tell is one of stunning hypocrisy and of the slow grind of earth shifting beneath us.

Weinstein was right when he said, in a statement to the New York Times, that when he was growing up in the 1960s and ’70s “all the rules about behavior and workplaces were different.” It may not have been O.K. to ask your female subordinate to watch you shower, or offer her a naked massage, but tolerating inappropriate sexual behavior from men was a cost many women entering the workforce assumed they had to bear. That began to change with Anita Hill’s testimony in 1991 during the Senate confirmation hearings for Supreme Court Justice Clarence Thomas. Under oath and the glare of reproachful white men, she detailed Thomas’ sexual advances and pornographic commentary. Thomas was confirmed anyway, but sexual harassment entered the mainstream lexicon.

Twenty-five years later, the concept is a staple of employee manuals, mandatory trainings and HR departments. Still, power differentials matter. Overt harassment may be increasingly kept in check, but sexual coercion and abuse have not been eradicated. They are simply more likely to be hidden from plain view–in an office with the door closed, in the corner of a company party, at what was supposed to be a working dinner, in a room at the Peninsula Beverly Hills hotel. It’s no coincidence that harassment and even assault were pushed undercover at the same time more and more women entered previously male-dominated fields, rose to prominence and gained power in their own right. With more women in the room, and a few at the top, male workplace norms began to crack.

But only slightly. Across industries, there are still men so powerful, they seem untouchable. Feminist gains have only amplified this disconnect: women are told that the playing field is fair, so when men behave badly and everyone seems to know about it, it’s not just hard to rock the boat–it’s hard to know there’s a boat that needs rocking.

Sexual-assault accusations had been swirling around Bill Cosby for years. But none seemed to stick, until they did–and more and more upon those. Cosby has so far escaped legal consequences, but he’s a social pariah, with his reputation as a goofy sweater-wearing patriarch in tatters. Then in July 2016, Fox News anchor Gretchen Carlson filed a lawsuit against Roger Ailes, alleging years of sexual harassment from the Fox head honcho. Within days, more than half a dozen other women told stories of their own, and Ailes was fired before the month’s end (albeit with a $40 million severance package).

In October of that year, the Washington Post published a video of Donald Trump bragging about grabbing women’s genitals. More than a dozen women came forward to say he had done some version of just that, from forcibly kissing them to sexually assaulting them. (He denied the accusations.) Between January and April, it came to light that Fox News host Bill O’Reilly had settled millions of dollars’ worth of sexual-harassment claims. Some of the stories had been previously reported, but after Cosby, Ailes and Trump, they took on new urgency and were treated with newfound seriousness. O’Reilly, too, was fired.

Each of these high-profile cases echoes the last and accelerates the next. Toppling the first few titans was a heavy lift, and while it’s still not easy, each successive predator seems to fall that much faster. Feminists have succeeded in getting sexual harassment and assault taken seriously enough to be career-ending. News organizations increasingly recognize that breaking these stories benefits both their reputations and their bottom line–the first to get there sets the media narrative for days or weeks. With each of these stories, you can imagine the newsroom dictates: Find the next Weinstein. And, if you’re the kind of person to whom someone might talk about these things, you hear women whisper: Should I speak out about my own Weinstein?

This growing cacophony of mostly female voices no doubt has the remaining Weinsteins of the world holding their breath. But since the story broke, there has been a collective exhale among the women finally speaking out about “casting-couch culture,” as Glenn Close put it in her statement condemning Weinstein. On the heels of the initial reports, Gwyneth Paltrow said that when she was a 22-year-old actress, Weinstein called her into a meeting in his hotel room, put his hands on her and, after her then boyfriend Brad Pitt confronted him about the harassment, threatened her to keep quiet. In the New Yorker, writer Ronan Farrow detailed additional accusations, including rape, and described the well-staffed machine that deceived young women into spending time alone with a man everyone knew was a predator. Weinstein was not a solo operator, and now his vast network of enablers is also falling under the scrutiny of the entertainers, journalists and activists who expect heads to roll. Weinstein’s connections, political and professional–his power–have not protected him.

Amid the wave of allegations and outcry from other Hollywood luminaries, Weinstein was fired. The Weinstein Company’s all-male board was divided on his fate. Within 48 hours, four board members had resigned.

Weinstein had hobnobbed with the Democratic elite, including the Obamas and the Clintons. (Malia Obama was an intern at his company.) He had donated to prominent Democrats, including Elizabeth Warren and Al Franken. After the allegations surfaced, the Beltway cohort renounced him: the Obamas released a statement saying they were “disgusted” by the reports, and many Democrats turned the money he had donated over to charity, claiming Weinstein’s reputation hadn’t traveled from L.A. to D.C.

But the Weinstein saga nevertheless quickly became a political volleyball. Where was Hillary Clinton’s denouncement? asked Donald Trump Jr. Why did the liberal media cover this up? wondered right-wing pundits. Clinton said she was “shocked and appalled by the revelations”–only to be excoriated by Kellyanne Conway for taking five days to speak up. Never mind that it has been more than 365 days since video came out of Conway’s boss boasting that he can “grab [women] by the pussy” because “when you’re a star, they let you do it. You can do anything,” with no denouncement or resignation from Conway or any other members of his staff as a result. Never mind that the “liberal media” broke the Weinstein story (as well as the stories about Ailes and O’Reilly, who both worked at a conservative media company that, the accusers say, systematically covered up their misbehavior). When it’s right-wing men in influential positions, harassment is too often downgraded to “locker-room talk,” and “pussy grabbing” is boys being boys.

The supposedly liberal men of Hollywood weren’t much better. With only scant exceptions–Seth Rogen, Mark Ruffalo, George Clooney–many of the progressive men of the entertainment industry seemed to have gone curiously missing. Even among feminists, there was less of a collective smugness about Weinstein’s undoing than there was about the accusations leveled against Ailes or O’Reilly. It’s less satisfying when the powerful men in question have play-acted something resembling feminism–and perhaps even manipulated women’s causes to shield their abuses.

One certainly understands why working actresses may continue to remain silent: when he got word that he could be fired, Weinstein solicited support from talent agents and industry executives so that he may eventually “resurrect” himself. His spokeswoman confirmed to the New Yorker that “Mr. Weinstein is hoping that, if he makes enough progress, he will be given a second chance.” For his part, Weinstein has alternately claimed and denied responsibility. In a bizarre statement to the New York Times, Weinstein first justified his actions, then quoted Jay-Z about wanting to be a better man. Weinstein also said he’s been trying to change his ways “for 10 years.” The statement concluded with lines about his coming battles against the NRA, the location of his bar mitzvah and the $5 million foundation at the University of Southern California that he was organizing to support female directors. “It will be named after my mom, and I won’t disappoint her,” Weinstein said. (The pledge was subsequently rejected.) But before he could finish saying “mea culpa,” his lawyer Lisa Bloom, who initially advised Weinstein on the unfolding scandal, was denying the allegations as “patently false.”

Every woman knows these men. We’ve worked for them, loved them, married them, raised them. We’ve watched their movies and read their books and cast ballots checking their names. We’ve occasionally been the Lisa Bloom in the Harvey Weinstein drama, compromising our ideals to defend a friend or protect our own hard-won but tenuous position. Every woman also knows the pretty good men who aren’t predators, but who intentionally or tacitly create the conditions for the predation, degradation or even just marginalization of women: the men who make up all-male boards and executive leadership, who don’t want to create discomfort by challenging sexism from friends or co-workers, who hire and mentor and promote younger men who remind them of themselves, who go silent on “women’s issues.” We are often quick to absolve them, and how could we not? Severing our ties with all of these men would require self-banishment to a remote cave, or at least expatriation to a radical commune. The Roger Aileses of the world are easy to dismiss, and their downfalls are easy to celebrate. The men who are supposed to be on our side, though–these men are the ones who break our hearts.

Filipovic is a writer and lawyer 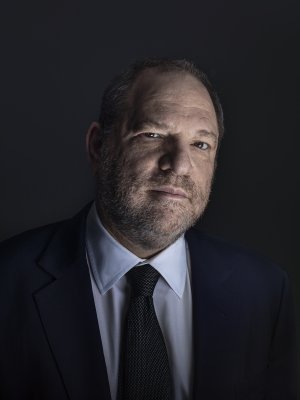 How Do You Solve a Problem Like Harvey Weinstein?
Next Up: Editor's Pick