Chinese contemporary artist and activist Ai Weiwei attends the news conference for his instillation 'Good Fences Make Good Neighbors,' in Manhattan on Oct. 10, 2017.
Anthony DelMundo—New York Daily News/Getty Images
Ideas
By Belinda Luscombe
Luscombe is an editor-at-large at TIME and the author of Marriageology: The Art and Science of Staying Together.

Your exhibition in New York City is called “Good Fences Make Good Neighbors.” What’s it about?

Before the Berlin Wall collapsed, about 11 nations had border [walls] and fences. Now it’s jumped to 70, so you have seen the tendency to exclude and to defend. New York is a city that is made of immigrants. This is not a normal kind of public art; it uses the city as a ready-made and develops projects through the city’s boroughs, especially the immigrant areas, using bus shelters and subway stops.

Some people support President Trump’s wall because they’re worried about being overwhelmed by people from other countries. What would you say to them?

There’s a lot of talk about the potential danger. It’s saying, “We are better than them. They are the danger. They are the problem.” It’s trying not to recognize humanity as one. It’s against the ideology that we’re all created equal, and it’s a violation of our understanding of human rights and human dignity, and it’s just such a backward movement.

First, I’m an artist. Absolutely, my art is with me in all my activities. My defense of human rights or freedom of speech is really related to the very essential core of the art practice.

There’s a discussion going on about Confederate statues in the U.S. Do you think they should be removed?

I support the freedom of speech. I think that is what we have to defend, and even though those statues may not be pleasant, they still reflect where we come from. If you see what happens in China, the party constantly changes reality and history to its own favor, which really establishes a totally tyrannical control.

You lived in the U.S. for a little while as an art student in the ’80s. Were you in the country legally?

Nobody ever asked me that question. I came to the U.S. as a student. But I dropped out of school and so I became an illegal alien in New York City for years. Nobody ever checked–not even when I brought a lot of trouble to the police, when we had the [Tompkins Square Park] riots.

Why did you pull back on social media?

I grew up in a society in which no individual voice can be heard, whether you are a President or company leader or poet. So when social media provided me such a possibility, I got absolutely lost in it. I was kind of completely wild, and I spent, like, 24 hours a day [with it]. It was just never enough. After so much argument about those very essential values, I lost my voice. It’s just like a singer lost his voice because I repeatedly talked about those big issues. And then one day I had a chance to develop artworks.

You paid a price for your father’s work as a poet when he was exiled. How do you feel about your son in that context?

I was born while my father was being purged, and I grew up in this exiled condition; he cleaned public toilets in a very remote area. And then for 30 years, he was forbidden to write anything. But he is today the most patriotic poet, loves his nation, his people and the fight for the independence of the nation. At the time I was arrested, my son was only 2½. When I went into detention, the only thing I felt sorry about is I thought I was going to be sentenced to over 10 years. So my son’s condition really made me become much softer. I have to protect his safety, have to send him to Germany to a safe ground and also I have to take this exile path with him. 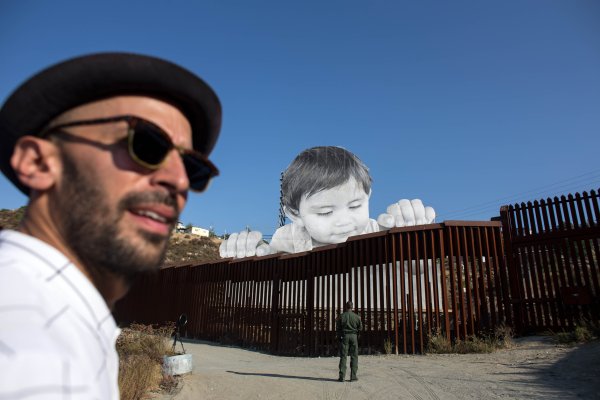 Trump's Border Wall Won't Get in the Way of a 'Giant Picnic'
Next Up: Editor's Pick