Catalonia Voted to Breakup With Spain. Now for the Hard Part

In the hours before the president of Catalonia took the podium, the rumors were coming thick and fast. No one seemed sure if Carles Puigdemont would declare independence unilaterally for the region of Spain he leads, or if he would sue for negotiations with the Madrid government of Prime Minister Mariano Rajoy. Yet when the president at last spoke on Oct. 10, he tried to split the difference. “The people had determined that Catalonia should become an independent state,” he said, before asking parliament to “suspend the effects of the independence declaration for the coming weeks while we embark on a dialogue.”

The statement neatly represents the bind in which Catalonia finds itself after the Oct. 1 independence referendum, deemed illegal by Spain. By combining two seemingly incompatible ideas like unstable atoms in a molecule, Puigdemont may have created a framework that will prove radioactive: for Catalonia, Spain and even Europe as a whole. Yet it was the only real choice he could make.

This corner of Spain is now in uncharted territory. First came a general strike by referendum supporters outraged by heavy-handed attempts by the police to halt the vote. That was followed by huge protests from a so-called silent majority that favors remaining in Spain. For days it has seemed as if the country was hurtling toward the brink.

The so-called silent majority rallies in opposition to independence from Spain in Barcelona on Oct. 8
Jeff Mitchell—Getty Images

If so, it’s a precipice the two sides have constructed together. After winning a majority in the Catalan parliament, pro-independence parties defied the central government and called the referendum. The world sided with Spain, until its government began arresting local politicians and confiscating ballots. When the referendum took place, independence won 89% of the vote, though with only a 43% turnout and marred by voting irregularities.

Now, Puigdemont faces a dilemma. He knows Catalonia needs international support to maintain its bid for independence. And the violent images that circulated around the globe after the vote provoked sympathy for his cause. But the independentistas can’t always count on police violence to make their case for them. So Puigdemont chose to present his side as open to dialogue. We’re the reasonable ones here, he seemed to be saying, and we trust the democratic process.

Spain, however, has rejected this gambit. Rajoy has promised he will not negotiate unless the Catalans first renounce their declaration of independence. “The Catalans are suggesting a mediation that would bring the two sides to the table as legitimate equals,” says José Ignacio Torreblanca, opinion editor of Spain’s largest newspaper, El País. “But [Spain] can’t do that, first because one side is breaking the law, and then because equal standing is exactly what Catalonia wants.”

Instead, Rajoy intends to stand in the way of Catalan secession, at all costs. He is now set to invoke a never-before-used constitutional provision, Article 155, to reinstate home rule over the region. What this means no one knows for sure, says Joan Vintró Castells, professor of constitutional law at the University of Barcelona. “[Article] 155 is not specific,” he explains. “All it says is ‘the State will adopt the necessary measures.'” These might mean anything from taking over public administrations to sending in the military.

A supporter of independence drives a tractor near Barcelona’s Arc de Triomf after Puigdemont’s remarks on Oct. 10
Santi Palacios for TIME

But Rajoy may pause before repeating the kind of tactics that strengthened the independentistas. And given the divisions within that movement, he may yet stay his hand. “Ultimately nationalism has to break by its own internal forces, rather than a push from outside,” Torreblanca says. “We have a saying in Spanish: let it cook in its own sauce.”

But who, exactly, is the one getting cooked? This crisis is driven not just by a desire for independence by a region with its own language, identity and history of chafing at Spanish dominance that dates back centuries. There’s also frustration with a sclerotic central government riddled with corruption and hampered by its inability to respond to the demands of a changing society.

Puigdemont’s gamble has bought some time, but nothing is resolved. On Oct. 11, Rajoy upped the ante by taking the first step in activating Article 155 and asking the Catalan government if it has made a declaration of independence. It was, he said, an attempt to achieve clarity.

But if there’s one thing this crisis has made plain, it’s that things can change fast. That was obvious to the 30,000 independentistas who gathered on a boulevard just north of the Catalan parliament to watch Puigdemont’s speech on a big screen and who ended up booing the man whom, moments before, they had cheered. 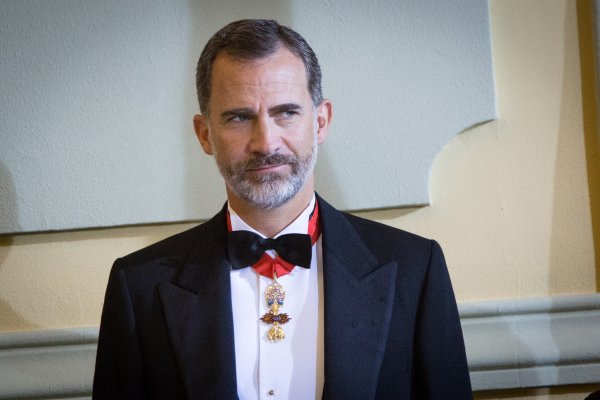 Spain's King Felipe VI Weighs in on Catalan Referendum
Next Up: Editor's Pick