(WASHINGTON) – The U.S. environmental regulator warned residents of Puerto Rico on Wednesday not to break into wells at industrial waste sites as parts of the island still struggle with drinking water shortages three weeks after Hurricane Maria hit.

“There are reports of residents obtaining, or trying to obtain, drinking water from wells at hazardous waste ‘Superfund’ sites in Puerto Rico,” the Environmental Protection Agency (EPA) said in a release.

Superfund sites are areas contaminated by hazardous industrial waste that have been identified by the EPA as candidates for a federal clean-up program.

The EPA advised against “tampering with sealed and locked wells or drinking from these wells, as it may be dangerous to people’s health.”

Puerto Rican Governor Ricardo Rossello said on Monday drinking water supplies have been restored to nearly 60% of the island but some areas in the north remained at around 20% after Hurricane Maria hit the U.S. territory.

It was not immediately clear which Superfund sites the EPA was referring to. Puerto Rico has about 24 industrial waste sites contaminated by industries including pesticides and battery recycling.

Toxic waste is not the only drinking water worry in Puerto Rico. The agency said raw sewage continues to be released into waterways and is expected to continue until repairs can be made and power is restored. The EPA advised people to boil water from rivers and streams for one minute, or disinfect it with bleach. 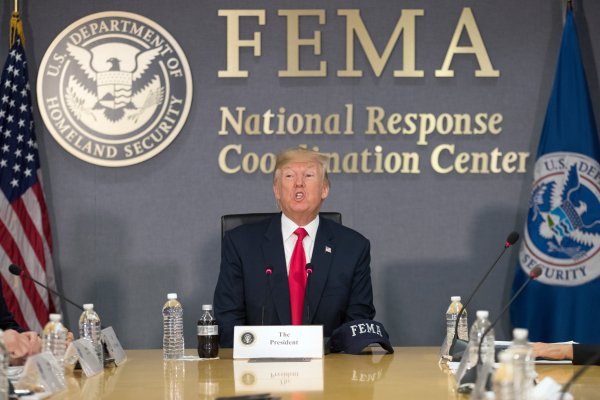 Trump Is Still Playing Defense on Hurricane Maria
Next Up: Editor's Pick