Myanmar’s security forces conducted a “well-organized, coordinated and systematic” offensive against the Rohingya population that deliberately aimed to permanently expel the Muslim minority from the country, a damning U.N. report concluded Wednesday.

“Credible information indicates that the Myanmar security forces purposely destroyed the property of the Rohingyas, scorched their dwellings and entire villages in northern Rakhine state, not only to drive the population out in droves but also to prevent the fleeing Rohingya victims from returning to their homes,” said the report, compiled by team from the U.N. human rights office.

The U.N. probe was based on interviews with some of the 519,000 Rohingya refugees who fled to Bangladesh in the wake of the Aug. 25 crackdown by security forces and Buddhist vigilantes.

The military’s brutal “clearance operations” were ostensibly launched in response to attacks by a Rohingya militant group. However, the U.N’s report casts doubts over the timeline. The team contends that the military operations began weeks prior to the insurgent’s attacks, with the arrest and disappearances of influential and educated Rohingya leaders in order to weaken the community’s culture and history.

After creating a “climate of fear and intimidation,” the security forces reportedly directed some villagers across the border, according to the U.N.

“In some cases, before and during the attacks, megaphones were used to announce: ‘You do not belong here – go to Bangladesh. If you do not leave, we will torch your houses and kill you,’” the report said.

Soldiers then indiscriminately targeted fleeing civilians, including young children, it added. “Almost all testimonies indicated that people were shot at close range and in the back while they tried to flee in panic.”

The U.N. experts said the military’s campaign involved purposefully instilling fear and trauma, with witnesses reporting rape, torture and extrajudicial killings at the hands of the army.

“The Myanmar security forces and supporting Rakhine Buddhist individuals reportedly forced victims, including small children, to watch as torture was inflicted on their loved ones,” the U.N. said.

“Information was collected related to girls as young as five to seven years of age who had been raped, often in front of their relatives, and sometimes by three to five men taking turns, all dressed in army uniforms.”

Landmines planted along the border around the time Rohingya began fleeing were also deliberately installed to prevent return, the report alleged.

Myanmar’s government and military have repeatedly denied any human rights abuses have occurred during clearance operations in northern Rakhine State. The campaign is widely supported throughout the country, where there is little sympathy for the long-persecuted Rohingya minority.

Aung San Suu Kyi, the country’s de-facto leader and a Nobel Peace Prize laureate, has said that her government stands with the military on the crackdown. The military chief has referred to the crisis as an “unfinished job.”

U.N. High Commissioner for Human Rights Zeid Ra’ad Al Hussein, who previously described the military operation as “a textbook example of ethnic cleansing,” said in a statement released with the report that Myanmar’s campaign is “a cynical ploy to forcibly transfer large numbers of people without possibility of return.”

The U.N.’s in-country team in Myanmar has come under fire for its handling of the long-simmering Rohingya crisis. The body has reportedly been fraught with internal divisions over whether to push the issue with top-level government officials in Myanmar, possibly at the expense of other aid projects. On Wednesday, the U.N. announced that its top official in Myanmar, Renata Lok-Dessallien, would finish her four-year assignment at the end of the month.

A BBC investigation accused Lok-Dessallien of suppressing discussion of the Rohingya crisis.

The U.N. announced Lok-Dessallien’s planned rotation in June, but said at the time that the reassignment was not performance related. Myanmar’s government has rejected a proposed successor. 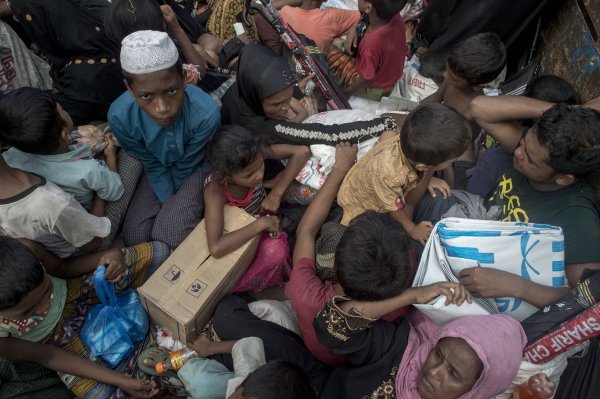