President Trump Could Decertify the Iran Nuclear Deal. That Could Massively Backfire

President Donald Trump is expected to announce his decision to decertify the 2015 international agreement that limits Iran’s nuclear program on Friday, injecting uncertainty into the already chaotic geopolitics in the Middle East and raising the risk of conflict between Iran and its adversaries across the region.

The President faces an October 15 deadline to certify whether Iran is complying with the nuclear agreement, which was negotiated in 2015 under former President Barack Obama. Trump twice confirmed Iran’s cooperation with the deal earlier in his presidency, but he now appears determined to withdraw his endorsement.

Decertification would throw the issue to Congress, which can decide whether to re-impose sanctions on Iran that the deal eliminated. The resumption of certain sanctions could lead to the unraveling of the agreement itself, along with renewed Iranian nuclear activity and increased instability in the Middle East.

From the battlefields of Iraq and Syria to the Persian Gulf and Yemen, Trump’s campaign to isolate Tehran could upend a delicate balance between Iran, the United States, and allies of the two countries. If the President’s declaration leads to the collapse of the deal, it would strain the international coalition fighting ISIS. In Israel, it would renew calls for preemptive military strikes on Iran. Even among U.S. allies who initially opposed the deal, such as Saudi Arabia and the United Arab Emirates, Trump’s anticipated announcement represents a puzzling interruption of the status quo.

The risk of an Iranian-American confrontation is highest in Iraq and Syria, where the U.S. military is deployed in close proximity to Iranian-backed forces. In Iraq, America and Iran are on the same side of the war against ISIS, but the uneasy alliance between Iraq’s disparate forces is creaking as the ground war against the Islamic State draws to a close. In Syria, the U.S. and Iran back opposing sides in a complex civil war, and Iranian and American allies are engaged in a standoff in the country’s south and east. Analysts say the erosion of the Iran deal heightens the possibility of direct conflict between the two sides.

“We can anticipate greater escalation,” says Dalia Dassa Kaye, the director of the Center for Middle East Public Policy at the RAND Corporation. “We already had a trend-line moving in this direction once the fight against ISIS is over in terms of dislodging them from the territory.”

Trump denounced the nuclear deal as a “disaster” during his presidential campaign. Since taking office, he has assailed the Iranian government as a state sponsor of terrorism and a destabilizing force in the region. His call to abandon the Iran deal, however, contradicts the advice of Defense Secretary James Mattis and other senior officials who want to uphold the agreement, which has so far succeeded in limiting Iran’s enrichment of uranium. Just this week, the United Nations’ atomic watchdog again confirmed that Iran is in compliance with the deal.

The White House is also considering other moves against Iran that could have explosive results. The President is reportedly weighing a decision to declare Iran’s elite Revolutionary Guards Corps a terrorist group. Iran this week vowed a “decisive and crushing” response to such a move. The Revolutionary Guards are Iran’s most powerful security force, and an influential institution both within the country and elsewhere in the region. And on Tuesday, the United States announced a reward for two senior officials from the Iranian-allied Lebanese armed group Hezbollah. Trump administration officials say they plan to pressure other countries to brand Hezbollah a terrorist group as a part of a broader strategy to contain Iran and its allies.

Iran has expanded its influence throughout the Middle East since the completion of the nuclear deal in 2015. Iranian military assistance was instrumental in helping the regime of Syrian President Bashar Assad survive the armed rebellion against his rule. In Iraq, pro-Iranian militias blocked the advance of ISIS in 2014, often taking the place of Iraq’s conventional army, which was built under U.S. occupation following the 2003 invasion that toppled Saddam Hussein. In Lebanon, a pro-Iranian government now holds power. Throughout the region, Iran has shaped the theater of possible conflict to its advantage.

As a result, Trump’s White House may have few options to truly curb Iranian influence on the ground. According to Robert Ford, the former U.S. ambassador to Damascus, the U.S. could consider building up Kurdish-led militias in eastern Syria who are America’s main partner force in the country, but that would do little to change Iranian influence in Syria’s larger cities in the country’s west. “I think the Trump administration will find they don’t have a lot of good levers,” says Ford. “Once the Americans and the Israelis made the decision to allow Bashar al-Assad to win the civil war, surprise, they get an entrenched Iranian presence in Syria. They go hand in hand,” he adds.

Elsewhere in the Middle East, Iran’s traditional opponents now accept the nuclear agreement as a status quo, and have not publicly called for the deal to be undone. Saudi Arabia, for example, called in September for the deal to be “strictly enforced,” rather than dropped. In Israel, much of the security establishment now supports the continuation of the deal, placing Israeli generals at odds with Prime Minister Benjamin Netanyahu, who backs Trump’s calls to abandon the deal.

“This decertification business is making [Iran] feel like they have the upper hand internationally because it’s the U.S. for the time being that looks isolated. Frankly . . . the only one that seems to be supporting this decision is Prime Minister Netanyahu,” says Dassa Kaye.

Ali Vaez, an Iran analyst at International Crisis Group, said the Trump administration’s planned “pressure campaign” against Iran could backfire. “The administration could usher in what it purportedly seeks to prevent: greater Iranian assertiveness, more regional instability and lower odds of resolving the conflicts in Syria, Yemen, and Iraq — places where Iran is part of the problem and thus, inescapably, must be part of the solution,” he says.

Iranian-backed forces have confronted the United States in the past. In Iraq, pro-Iranian militias were blamed for attacks on American forces in the years following the 2003 invasion. In Syria, Iranian-backed forces have attacked rebel groups supported by the West. If the Iranian nuclear agreement were to collapse, it would raise the specter of a return to full-blown proxy war with Iran.

“There is a lot of capacity for spoiler behavior on the part of Iran and more direct kinds of confrontation on the part of Iran,” says Michael Hanna, a senior fellow at the Century Foundation in New York. “You don’t get there with this announcement, but it does introduce uncertainty. It does open the possibility of a much more serious deterioration.”

At the White House on Oct. 5, Trump told reporters during a photo opportunity with senior military commanders that they might be witnessing “the calm before the storm.” A reporter asked the president whether he was referring to Iran or ISIS. He declined to clarify his comment further. 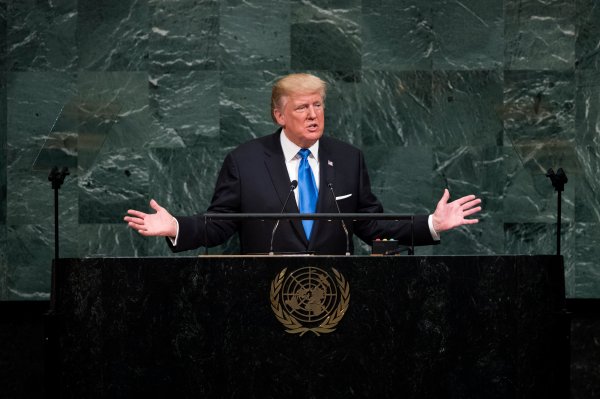 Trump's Desire for a Better Deal With Iran Could Isolate the U.S.
Next Up: Editor's Pick