Canada's Justin Trudeau: We'll Show You 'Can Be a Minister and a Mom'

As Prime Minister of Canada, Justin Trudeau wanted one thing none of his predecessors had: a Cabinet with an equal number of men and women.

But almost exactly two years after Trudeau’s election, the leader of Canada’s Liberal Party is dealing with some unanticipated consequences of that decision. For starters, pregnancy in the Situation Room—something that until now, has been unheard of in North American governments.

“Now that we have a Cabinet, and a government, and quite frankly, a party with all these great, strong, young women, the challenge we have is, despite all their presence, we’re still very much in an old-fashioned man’s game of politics,” Trudeau said Tuesday evening on stage at Fortune’s Most Powerful Women summit. “And we’re having to look at how we change things in the workplace.”

When Karina Gould, who serves in Trudeau’s Cabinet as Minister of Democratic Institutions, announced last month that she was expecting a baby, it forced Canada’s highest level of government to confront the issue of maternity leave for the first time, the prime minister said.

“She’s going to have a baby in the spring, it’s hugely amazing, but what do we do about maternity leave? This is the first minister in Canada and maybe one of the first in Western democracies to be having a kid,” Trudeau said at a dinner held at the Smithsonian’s National Portrait Gallery.

Gould announced her pregnancy on her Twitter feed Sept. 5. The baby is due in March 2018.

At the time, though, Canada had no policy in place allotting a certain number of paid weeks off to Cabinet ministers—and Trudeau is still working on creating one. “We’re giving her as many as we can figure out that we need to, and as many as she wants, like we don’t know!” he said. “We’re writing this, but we’re writing it together with her, and she gets to help define it, and hopefully we’re get to show that it’s possible to be a minister and a mom, and everything, according to your own choices.”

Trudeau, No. 31 on Fortune’s World’s Greatest Leaders list, has made women’s rights a pillar of his political platform, even pushing to include a “gender chapter” in the North American Free Trade Agreement (NAFTA) that he is working to renegotiate with President Trump. (The Prime Minister is set to meet with Trump to discuss NAFTA Wednesday, but said the meeting came about because he “was in town for [the Most Powerful Women summit], just so you know.”)

The Canadian leader also said he has managed to “find common ground’ with Trump even though their politics differ greatly. “President Trump got elected on many of the same goals I got elected on—making sure that people who don’t feel like the success and the growth of the economy has worked for them do better.”

There was also one other surprise from creating Canada’s first Cabinet with complete gender parity, Trudeau added: “It has led to a better level of decision-making than we could ever have imagined.” 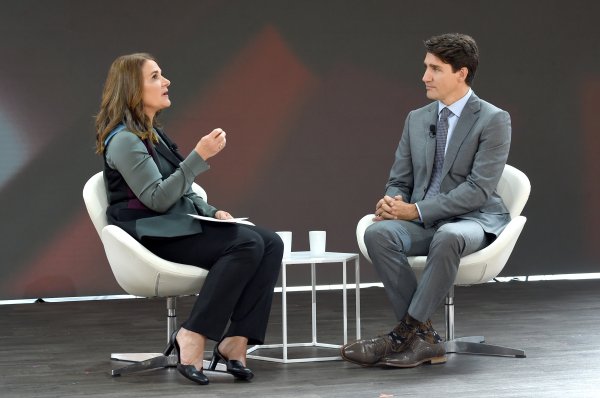 Justin Trudeau's Socks Are Throwing the Internet for a Loop
Next Up: Editor's Pick