Turtles All the Way Down is the first novel from YA fan-favorite John Green since the release of his 2012 phenomenon The Fault in Our Stars. The book tells the story of Aza Holmes, a 16-year-old girl living in Indianapolis who attempts to solve the mystery of a fugitive billionaire while grappling with severe anxiety and obsessive-compulsive disorder.

TIME recently spoke with Green about the novel and how it explores the way mental illness can affect daily life. The 40-year-old author has previously laid bare his own struggles with mental health, a topic that he thinks should be discussed openly.

TIME: How did you want to depict Indianapolis, where you were born and now live?

John Green: My wife Sarah and I have lived there for 10 years now and I love it. I wanted to write about it the way that I think most teenagers relate to their hometowns — they have a certain fondness for the place they’re from, but they see with great clarity what’s wrong with the place that they’re from too.

Where did this story come from? How did you come up with the idea to have a fugitive billionaire propel the action?

You’ve been extremely open about talking about your own struggles with mental illness. What was it like to write about the specific type of OCD and anxiety you’ve suffered from?

I had to write with enough distance from myself to make it OK, to make it feel safe. And so Aza has somewhat different focai of her obsessive concerns and the behaviors she uses to manage them. I still can’t really talk directly about my own obsessions. The word triggering has become so broadly used in popular culture, but anyone who has experienced an anxiety attack knows how badly they want to avoid it. It was really hard, especially at first, to write about this thing that’s been such a big part of my life. But in another way, it was really empowering because I felt like if I could give it form or expression I could look at it and I could talk about it directly rather than being scared of it. And one of the main things I wanted to do in the book was to get at how isolating it can be to live with mental illness and also how difficult it can be for the people who are around you because you’re so isolated.

You emphasize the idea that there’s no magical cure for mental illness throughout the book. Why was it important to you to convey that message?

We really like stories that involve conquering obstacles and involve victory over adversity. And I love those stories too. It’s just that hasn’t been my story with mental illness and I didn’t really want it to be Aza’s. For me, it’s not something I expect to defeat in my life. It’s not like a battle I expect to win. It’s something I expect to live with and still have a fulfilling life.

What inspired you to use the turtles all the way down story — an anecdote that illustrates the problem with infinite regression — as a metaphor for Aza’s struggle?

I love that story. When I first heard it I was a college student. I thought that it was about how stupid superstition is and how science is right and everyone else is wrong. And now I realize — or I think now — that that’s not the point of the story at all. The point of the story is that the scientist is right but the old woman saying that the world rests on a turtles all the way down situation, she’s also right. They’re both right because obviously the world is a sphere — I’m not like a flat-Earther or anything —but the world is also the stories we tell about it. The stories we tell about it matter. They shape the actual world and they shape our actual lives. So that is very helpful to me in thinking about why I like writing and reading. But it also is very helpful to me in reminding me that I do have some say in framing my own experience. Even though I may go for long periods of time where I don’t have control over my thoughts and that is scary and destabilizing for my sense of self, I do have some say in the story of my life.

Your books are read by people of all ages. But what do you feel is the importance of incorporating issues such as mental illness into books for young adults?

I think there have been lots of good YA books about mental illness over the years. For me, one of the reasons I like writing YA books is because I love sharing a shelf with the other YA books that are being published now. I just think it’s a really wonderful time in young adult literature. I also like writing about teenagers because they’re doing stuff for the first time and it’s really intense. And one of the things they’re doing for the first time is asking the big questions about suffering and meaning and whether meaning is inherent in human life or it’s something we have to construct.

How do you feel this book fits into the current conversation about mental health and the push by many to destigmatize it?

I think some progress has been made in destigmatizing mental illness. I think there’s still a lot of stigma in the workplace. I think unfortunately there’s still a lot of stigma around hiring. I’m not a psychologist, I’m definitely not an expert on this stuff but one of the problems with the stigmatization is that it compounds the isolation. And I really hope we can keep breaking that down because I remember how alone I felt in it in high school and it was a big part of what made it so difficult to bear.

This is the second book in a row you’ve written from a female perspective. What do you find challenging about writing characters that you don’t directly identify with?

Well it’s always challenging. Any character is a sort of jump in empathy. Any time you’re writing from the perspective of a fictional character, you’re imagining what it’s like to be not you. And that’s one of the things I love about writing fiction is that it feels like an escape from my brain which can sometimes feel like not that fun of a place to hang out. I hope [Aza] seems real to people.

And you also had this great female friendship between Aza and Daisy in this one.

Yeah I really wanted to write about friendship. I wanted to write about all the different kinds of love that can sustain and support you. Romantic love is the one that we focus on the most in our cultural conversation and it’s certainly very important for a lot of people. But for a lot of people, other kinds of love are the most important. When I was in high school, it was the love of my friends that got me through.

Turtles All the Way Down is your first book since the massive success of The Fault in Our Stars. Can you talk about your experience writing the follow-up to that?

As long as I felt like I was writing the follow-up to that, I wasn’t writing. It was an incredible experience and an incredible privilege to have so many people respond to that book so kindly. It meant a lot to me but it did also mean that when I started trying to write again, I felt like there were people watching over my shoulder and that made it impossible for a long time. I think it was impossible for a variety of reasons. I also think I just had a period of bad mental health, which happens sometimes. Honestly, I felt like maybe I wouldn’t write another book and I got to be OK with that.

Can you tell me a little bit about fitting so many literary references into your work? What’s the process there?

In this story they came along the way or in some cases earlier. Some of the stuff was scavenged for parts from previous failed attempts at writing a book. But like that line in Ulysses where Molly Bloom says, “O Jamesy let me up out of this,” that’s something that I have said in my own life to whoever I feel like is forcing me to think these intrusive thoughts. That’s something that I’ve said thousands of times in my head or out loud.

Are there any YA authors right now that you’d like to highlight as deserving of more attention?

Angie Thomas’s book The Hate U Give is getting a lot of attention, but it should get more. It should be a book that’s being read, I think, in every high school English class in the country. It’s such a special book. I think it’s going to be remembered the way we talk now about The Outsiders. There’s also a book called Piecing Me Together by Renee Watson that is a brilliant look at the role that art plays in the lives of young people, but also all of these different ways that race and gender and privilege intersect in the life of this one really extraordinary young woman. That book I have been thinking about nonstop for the last six months.

What’s on your radar? What are you reading right now?

I just finished Little Fires Everywhere by Celeste Ng which is amazing. It’s so good. You’ll read like the first six pages and you’ll be like this is going to be the best. And it’s that good all the way through. 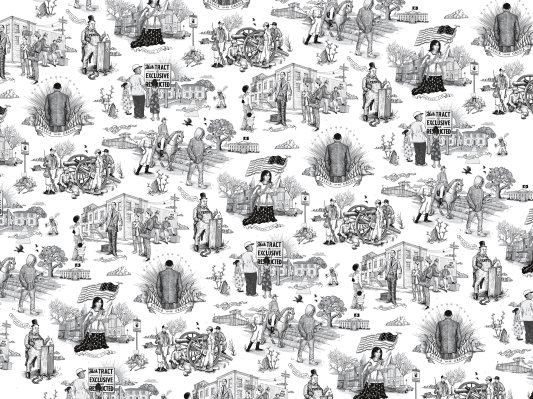 Review: We Were Eight Years In Power By Ta-Nehisi Coates
Next Up: Editor's Pick