Donald Trump boasted last month that the Obama Administration’s plan to regulate power plants will soon be “boom, gone.” Energy companies long assumed that when the dust settled, Trump would then put forward a plan more to their liking.

Instead, the Administration has no plans, and that’s making them nervous.

The Environmental Protection Agency announced Tuesday that it would repeal the Clean Power Plan, which seeks to lower the amount of carbon dioxide emitted by power plants. But the agency currently has no plan to replace it either, surprising many energy company executives.

“Most industry groups believe that the [Clean Power Plan] should be repealed,” said Jeff Holmstead, a former senior EPA official under George W. Bush who now represents energy companies, in an emailed statement. But “virtually all of them believe that EPA has a responsibility to regulate greenhouse gas emissions.”

For energy companies, the problem is that the federal government is already obligated to reduce the greenhouse gases that cause climate change. Thanks to a 2007 Supreme Court decision and a 2009 finding by the EPA, greenhouse gases are considered pollutants that can harm human health, which means the agency is required to take action under the Clean Air Act.

The Clean Power Plan — a central piece of the Obama Administration’s climate change efforts issued in 2015 — would have required states to create plans to reduce carbon dioxide emissions from the power sector. The plan aimed to reduce emissions from electrical generation by 32% by 2030 from 2005 levels, but each state would have had its own requirement based on capabilities. The measure never took effect following a Supreme Court stay.

Following Trump’s executive order earlier this year, many energy companies, utilities and power companies expected that the EPA would issue a less stringent rule after replacing the Clean Power Plan. Such a move could give industry considerable latitude while also satisfying the Supreme Court’s requirement that agency regulate greenhouse gas emissions. But now, without a replacement, the EPA will undoubtedly face litigation that will leave industry uncertain.

“The Trump Administration can get rid of these regulations,” Myron Ebell, who led Trump’s EPA transition team, told TIME last month. “But if the endangerment finding is out there, the next administration can implement similar regulations without a whole lot of delay.”

Ebell, other far-right conservatives and representatives of the coal industry have called for the EPA to work to eliminate the endangerment finding, but most environmental policy experts agree that such an effort would not stand up to court scrutiny given the overwhelming evidence in support of man-made climate change. EPA Administrator Scott Pruitt has said that he does not intend to challenge the document.

The EPA’s decision this week did leave the door open to an eventual replacement through a process known as Advance Notice of Proposed Rulemaking. That process will allow the EPA to solicit comments from the public and relevant stakeholders, but offers no guarantee that the regulation will be replaced.

“Any replacement rule will be done carefully, properly, and with humility, by listening to all those affected by the rule,” Pruitt said in a press release.

Without a replacement on the books, environmental advocates have promised to sue, and the lack of replacement will aid their cause. “A proposal to repeal the Clean Power Plan without any timeline or even a commitment to propose a rule to reduce carbon pollution, isn’t a step forward,” former EPA administrator Gina McCarthy said in a statement. “They’re using stall tactics to defer action.”

Now, what matters is what happens if and when the courts say the Administration can defer no more. 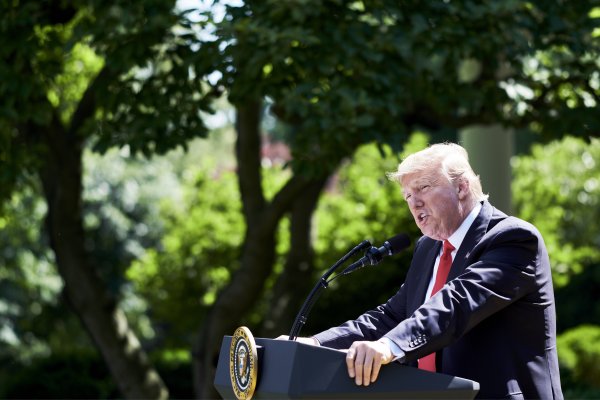 Why Trump Won't Say If He Still Thinks Climate Change Is a Hoax
Next Up: Editor's Pick