The last Leonardo Da Vinci painting that has been privately owned could be yours for casual $100 million.

The oil painting on panel, which dates back to the 16th century, is called the Salvator Mundi. While Da Vinci may be one of the most famous classical artists in history, his paintings we know of today are actually few and far between: fewer than 20 can be traced with certainty back to the Renaissance master. The Salvator Mundi, which happens to be a portrait of Jesus in the same dark, impassive style as the infamous Mona Lisa, is also the only known of those oil works to be held in private hands.

“The Salvator Mundi is the Holy Grail of old master paintings,” a Christie’s senior specialist in Old Master paintings noted in a release.

Its history is also dappled with intrigue. Originally held in the collection of King Charles in the 17th century, the Salvator Mundi next passed to an illegitimate son of the Duke of Buckingham, Christie’s explains. There, the trail turns murky: it disappeared and fell into obscurity, ultimately popping up at an auction in 1958 as a probable fraud. (It sold for 45 British pounds at the time, a pittance given what we know now.) The last half-century is another blank space in its story — that is, until it reappeared in 2005 at another auction and was carefully examined. Its true provenance discovered, it is now once again on the auction block Nov. 15. And it won’t be selling for much of a bargain this time.

But first, it will join a Last-Supper-themed Andy Warhol work on a global tour, so even those of us without $100 million burning a hole in our pocket might catch a glimpse of the masterpiece at long last. 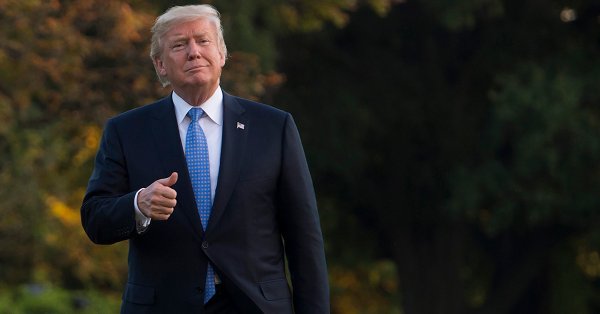 This Drawing By Donald Trump Is Now Up for Auction
Next Up: Editor's Pick