This Map Shows Where All the Wildfires in California Are Burning

Smoke and flames rise as a wildfire from the Santa Rosa and Napa Valley moves through the area in California, United States on October 10, 2017.
Anadolu Agency—Getty Images
By Jennifer Calfas

Fast-moving wildfires tore through California this week, destroying 1,500 homes, wineries and businesses in what has become one of the deadliest outbreaks in the state’s history.

A number of wildfires swept across Northern California in Napa and Sonoma counties just north of San Francisco — killing at least 17 people and forcing thousands of residents evacuate their homes as firefighters struggled to contain the roaring flames that have scorched tens of thousands of acres.

California Gov. Jerry Brown declared a state of emergency in Napa, Sonoma and Yuba counties, as well as in Butte, Lake, Mendocino, Nevada and Orange counties. Some Red Flag Warnings, which mean conditions are ideal for fast-moving fires, are still in place, according to the state’s department of Forestry and Fire Protection, known as Cal Fire.

While a number of active wildfires burn across the state, 17 new, aggressive ones grew this week, Cal Fire said. The city of Santa Rosa, Calif., experienced immense damage as the fire ripped through its residential streets — an atypical path of destruction from the hillsides and rural neighborhoods many of the wildfires in California destroy.

While the majority of destructive wildfires burned up north, an aggressive one also broke out in the hills of Anaheim, Calif., in the southern part of the state, where thousands of residents evacuated and eerie skies filled with smoke over Disneyland, the amusement park located in the city.

Due to dry vegetation and seasonal wind patterns, October typically is the most dangerous month for wildfires in California.

Cal Fire keeps an updated map of each active fire, which can be viewed below.

Severe, long-lasting fire seasons have become the new normal in California, officials have said. Even this season, which was the first after the end of a six-year drought, was similar in its devastation to those in recent years, where fires caused lasting damage and burned beyond the summer months.

“Fires are always going to be present with us, and there are always going to be ones that we simply cannot be able to control,” Glen MacDonald, the John Muir Memorial Chair of geography at the University of California, Los Angeles, told TIME in June. “I see no reason to relax and think this is something that will end in the future.”

Correction: The original version of this story misstated the name of one of the counties where California Gov. Jerry Brown declared a state of emergency. It is Yuba County, not Yupa County. 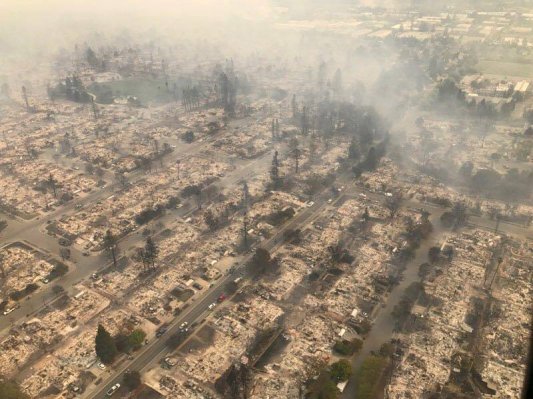 This Photo Shows the Sweeping Fire Damage in California
Next Up: Editor's Pick