Anthrax May Have Caused the Sudden Death of 100 Hippos

More than 100 hippopotamuses have died over the past week in Bwabwata National Park, in northeast Namibia, leaving authorities scrambling to explain the cause.

Agence France-Presse reports that some veterinary experts in the southwestern African country believe the sudden deaths may have been caused by anthrax.

“Over 100 hippos died in the past week. The cause of death is unknown but the signs so far show that it could be anthrax,” Minister for Environment and Tourism Pohamba Shifeta told AFP. He noted that the death toll could be higher, as crocodiles may have eaten some of the carcasses.

Anthrax, a potentially deadly bacterial disease, is known for killing big game, cattle, and sometimes even humans. Animals can contract anthrax spores in soil from grazing in warm arid climates — such as the African savannah.

“This is a situation that we have seen before,” the Ministry’s Director of Parks and Wildlife Management Colgar Sikopo told the New Era newspaper. “It happened in Zambia before, and it mainly occurs when the level of the river is [low].”

A 2004 survey estimated Namibia’s hippo population at around 1,300.

If confirmed, the anthrax outbreak wouldn’t be the first, or even the worst, in recent years. More than 2,300 reindeer and a 12-year-old child were killed by anthrax during a heatwave in Siberia in August 2016, while anthrax claimed an estimated 300 hippos in Uganda in 2004.

Elephants and hippos were also killed by a 2003-4 outbreak in Namibia’s Kasika Conservancy, Sikopo said, but this is the first incident in the 2,422 sq. mi. Bwabwata, one of the country’s top tourist attractions.

Humans can become exposed to the spores by handling infected animals tissues or pelts or by breathing them in, which is especially deadly, according to the FDA. Infected anthrax spores have also been used by bioterrorists in the recent past. Human deaths from anthrax in the U.S. are extremely rare.

In order to curb the spread of the disease, Namibian authorities are focused on preventing human exposure to the virus, both by limiting contact with the dead hippos and by advising locals not to eat them.

“We strongly advise that they must not consume this meat,” Sikopo said. “We are trying our best to burn every carcass to prevent further spreading of the disease, but also to ensure that no person gets to these animals and starts feeding on the meat.” 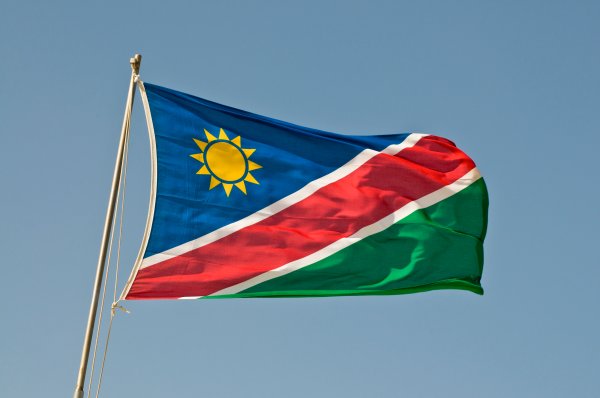 Namibia: 4 Facts About the Country Trump Called 'Nambia'
Next Up: Editor's Pick