Democratic lawmakers say the Trump Administration’s list of demands on a deal to protect hundreds of thousands of undocumented people brought to the U.S. as children is full of dealbreakers.

As part of a bill to allow so-called Dreamers to avoid deportation, the White House has asked for overhauling the green card system, cracking down on unaccompanied minors at the border and raising standards for those seeking asylum, among other things.

“The Administration can’t be serious about compromise or helping the Dreamers if they begin with a list that is anathema to the Dreamers, to the immigrant community and to the vast majority of Americans,” read a joint statement from Democratic leaders Sen. Chuck Schumer and Rep. Nancy Pelosi.

The two met with Trump at the White House in late September and announced they’d reached an agreement on how to protect recipients of Deferred Action for Childhood Arrivals, a Obama-era program that shielded around 700,000 immigrants from deportation. The Trump administration ended the program in September and gave Congress six months to come up with a legislative solution.

But the wishlist released Sunday appears to have hurt that deal. The list includes a demand for the construction of a border wall with Mexico, which the Democratic leaders said was off-the-table when they met with the president. “If the President was serious about protecting the Dreamers, his staff has not made a good faith effort to do so,” the Schumer-Pelosi statement reads.

Democratic Rep. Michelle Lujan Grisham of New Mexico, chair of the Congressional Hispanic Caucus, accused the White House of acting immorally and said the principles will jeopardize the legislative process. In the House, Grisham is leading an effort to force a vote on the Dream Act, which would allow immigrants brought to the U.S. as children to eventually become citizens.

“It is immoral for the President to use the lives of these young people as bargaining chips in his quest to impose his cruel, anti-immigrant and un-American agenda on our nation,” Grisham said.

Democratic Rep. Joaquin Castro, first vice chair of the Congressional Hispanic Caucus, suggested the Administration was being hypocritical: while stressing the importance of strong families, he said, it is working to implement policies that would split immigrant youth from their parents. “Immigrants are humans,” he said. “We should craft policies that treat them as such.”

Democratic Rep. Luis Gutierrez of Illinois, a fierce advocate for immigrants in the Congress, went even further, calling the president’s outline “an extension of the white supremacist agenda” in an interview with the Washington Post.

A Democratic aide familiar with the process told TIME on Monday that many of the principles outlined by the White House could face opposition from lawmakers both sides of the aisle.

“This is basically going after the Dreamers parents,” the aide said. “You’re basically saying, alright, we’ll let the Dreamers stay but then we want the machine to deport all their family members.” 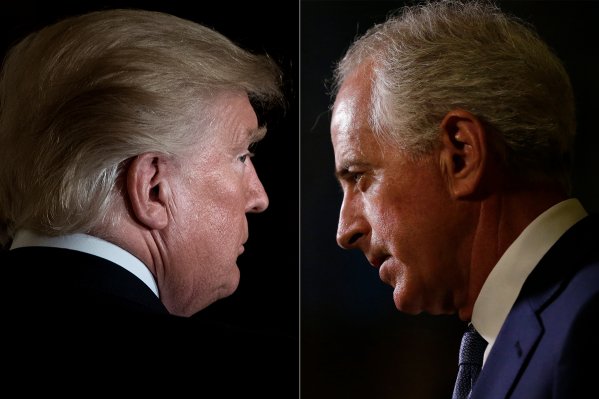