Former San Francisco 49ers quarterback Colin Kaepernick appeared to refute a report Sunday that he would stand during the National Anthem if he played in the NFL again.

“A lie gets halfway around the world before the truth has a chance to get its pants on,” Kaepernick tweeted with an attribution to Winston Churchill.

Kaepernick, who kneeled during the National Anthem while quarterback for the 49ers last year to protest racial injustice and police brutality, spoke with CBS NFL Insider Jason La Canfora on Saturday about his future as he remains unsigned by a team. In his retelling of the conversation on CBS Sports on Sunday, La Canfora said Kaepernick would not kneel during the National Anthem if given the opportunity to return to the NFL. But the two never discussed the issue, La Canfora later clarified on Twitter.

La Canfora said on Twitter he was relaying other reports about the athlete’s plans for demonstrations, not referring to their conversation specifically.

“My primary takeaway was that his sole focus right now is on being a quarterback,” La Canfora said Sunday. Later on Twitter, La Canfora doubled down on his reports that Kaepernick is working hard to return to the NFL.

Kaepernick was not signed with a team before the new NFL season. Insiders and supporters of Kaepernick have said his protests are why NFL teams are steering clear of the veteran quarterback who started for the 49ers and led the team to their Super Bowl appearance in 2013.

Despite not playing in the NFL this season, Kaepernick’s protests have influenced a number of players and teams as the movement amplified after President Donald Trump blasted those in the league who took a knee. At a rally last month, Trump appeared to refer to Kaepernick as a “son of a b–ch” and said NFL teams should fire players who chose to protests.

That weekend, more than 200 NFL players took a knee and others linked arms with their teammates before and during the national anthem to show solidarity. The movement has expanded outside of the NFL, too, with players kneeling at college stadiums and high school football fields.

Kaepernick has remained fairly quiet as demonstrations during the National Anthem occurred, though he has retweeted several people on social media encouraging NFL players to kneel. Off the field, the quarterback runs the Colin Kaepernick Foundation, where he has vowed to donate $1 million and all of his 2016 jersey sales to communities in need around the country. 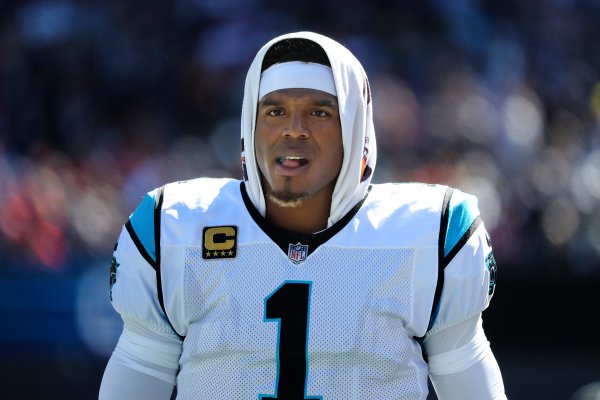 Cam Newton Under Fire for Mocking a Female Reporter
Next Up: Editor's Pick