Congress Wants to Eliminate the State and Local Tax Deduction. What's That?

Congress is beginning to debate major changes to the tax code that could affect your tax return as early as next year.

For now, the nine-page framework that Republicans have released on their plans for tax reform sketches only the broadest outlines of how it will change the tax code. One major part of the plan is to increase the standard deduction while cutting other deductions, including a major one for state and local taxes.

What is the state and local tax deduction?

Sometimes called the SALT deduction, it allows filers who choose to itemize their deductions — rather than claiming the standard deduction — to deduct either the amount of state and local real estate, property, sales, or income taxes paid over the course of a year. These deductions (both the standard and itemized) ultimately reduce the amount of income that gets taxed by the government. Filers have been able to deduct state and local taxes since federal income tax was conceived in 1913.

Who benefits from the state and local tax deduction?

According to the Tax Foundation, it is the most popular itemized deduction: of the approximately 44 million American households (about 30%) that itemized their deductions in 2013, about 43 million deducted what they paid in state and local tax. People who itemize tend to be on the higher end of the income scale — about 42% of households with annual incomes between $50,000 and $75,000 itemized their deductions in 2013, while 93.5% of households that made over $200,000 did.

People living in high-income and high-tax parts of the country also tend to benefit the most from the deduction. The Urban-Brookings Tax Policy Center found that in 2013, just over one-fifth of all of returns claiming the SALT reduction came from New York and California. Sixty-three percent of the deduction’s value flows to 10 states. Six of those states are on East Coast. In 2014, the average deduction in Manhattan was $24,898.

Why is Congress considering eliminating it?

It is estimated that eliminating the SALT tax could increase federal revenue by $1.3 trillion over the next 10 years. Writing in The Hill, Alex Brill of the conservative American Enterprise Institute estimated that repealing the deduction could help subsidize major parts of the tax plan, including the proposed tax cut for top filers and the expansion of the standard deduction.

Critics of the deduction argue it encourages localities to raise taxes, but ultimately reduces the amount of federal taxes the filers who claim it would have to pay. They also say the deduction is unfair because lower-income Americans rarely benefit from it — only about 10% of filers who make under $50,000 claimed the deduction in 2014.

Who opposes eliminating the state and local tax deduction?

Proponents of the deduction, including a bipartisan group of lawmakers who urged Treasury Secretary Steve Mnuchin not to eliminate the deduction in a June letter, say those who benefit from already pay a lot in taxes. And that money goes to benefit more than just residents in their area. “Our states are economic engines that deliver disproportionately more revenue to the federal government than they receive back, paying more for services delivered to the country at large,” the lawmakers wrote in June. Without the deduction, they argue, residents in high-tax states would face a higher tax burden, with little reprieve.

What will happen next?

Senate Minority Leader Chuck Schumer called the proposal to eliminate SALT “dumb” and warned it could tank the GOP’s plan to overhaul the tax code. Because blue-state Republicans have come out so strongly against an outright repeal of the deduction, lawmakers will likely come up with a compromise. As Brill wrote, that could mean a cap on how much of a filer’s income could be eligible for the deduction. Republican Rep. Chris Collins of New York told the New York Times that he’d been reassured that repealing the deduction outright was off the table. Instead, lawmakers could make taxpayers either claim a mortgage interest deduction or property tax on property worth up to $1 million. 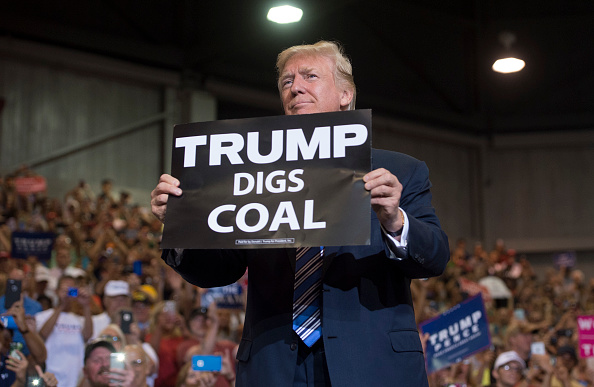 President Trump Loves Coal So Much It's Starting to Annoy the Oil and Gas Industry
Next Up: Editor's Pick