Last night, I walked into my house after three weeks on the road. My dog Bandit greeted me with a where the hell have you been face and there was a note on the counter from my mom. I reached into the fridge for a seltzer. I sat down and looked around, taking in the first quiet moments I’ve had in a while. My daughter Nora’s toys were scattered everywhere. God, I’ve missed her.

On the table there was a pile of magazines and newspapers my mom must have collected over the past couple of weeks. I don’t think I’ll ever get used to seeing my face next to Jake Gyllenhaal’s. It still feels pretty surreal and weird. So many of the articles lead off with something like Movie star talks about playing a real-life hero.

Hero. I’ve always struggled with that word. I’m just a guy who was in the wrong place at the wrong time. By some crazy twist of fate I was able to remember the moments leading up to the bombings, and in the end, it helped people. I’m not a hero; I did what any normal person would do. Carlos, the first responders, my medical team — they are the real heroes. The friends and family who stood by my bedside and stopped their own lives to save mine — they are heroes. The little kid who emptied his piggy bank for me instead of the Xbox he was saving for — that kid is a hero. Boston was understandably looking for a hero to heal their heartbreak, and the media needed a headline. I needed to rest and recover, and before I knew it, I was being wheeled into crowds, waving flags and touting Boston Strong. I wasn’t strong then. Not even close.

For so long I focused on all that I had lost — my legs, my anonymity, even my freedom in a way. I couldn’t jump in the car, blast some music and just get away for a bit. I couldn’t play basketball with my brothers. I couldn’t even get up in the middle of the night to go to the bathroom without making it some sort of production. I didn’t feel like a man. I couldn’t be the man Erin needed me to be, and that was what really almost killed me — not some idiot with a bomb in his backpack.

I didn’t know how to cope so I did the only thing I knew I could still do: party. In the years following the bombing, I nearly drank myself to death. I gained weight which made it harder to walk. I blew off physical therapy because I was too hungover to move. Let me tell you, chasing after a 2-year-old hungover on prosthetics is not a good look. I drank all night and slept all day until it was time to get up and do it again. I would do interviews and give talks about my experience, and I felt like such a phony. I was up on my soapbox telling people to be strong and I was a disaster inside and out.

Fifteen months ago, I hit rock bottom. Erin left and my health was at an all-time low. Something had to give. I got help and these days the only thing I’m drinking in excess is seltzer. (Jake reminds me daily that it is bad for my bone density and I need to drink regular water — but what does he know.) My sobriety has brought clarity that I didn’t think was possible after all that I’ve gone through. I’m back in school studying mechanical engineering and have found a new passion for sailing. I’m able to look back on this journey and appreciate the community that came together to help me even when I didn’t think I needed it. Now I can chase after Nora.

On September 12, we premiered STRONGER at Spaulding Rehabilitation Hospital in Boston. The room was filled with my family, friends, doctors and fellow survivors. When the lights dimmed, I felt really vulnerable… there are parts of this story that aren’t pretty, and I just wanted to make everyone proud. I wasn’t prepared for the response that I received — so many survivors thanked me for showing the daily struggles — like waking up, going to put your non-existent feet on the floor and falling flat on your face. Others told me how brave it was to showcase the impact my trauma had on me mentally, warts and all. I felt a little lighter. I stood a little taller. I felt a little stronger.

Tonight on the drive home, I saw a Google alert that my friends at Wiggle Your Toes had a screening for other amputees. They told the reporter how “real” the film felt and how much they could relate to me. They said they felt inspired and stronger.

I’m exhausted. The past few weeks have been a whirlwind, and I don’t think I’m made for the movie business. My heart is heavy thinking about Vegas, hurricane victims and all that is happening in the world. But if I can lay my head down tonight and know that some kid in the middle of the country who is going through a battle of his own can watch STRONGER and feel better… then it was all worth it. 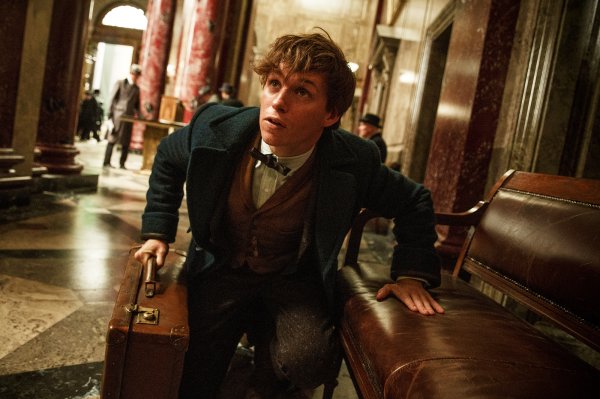 Pottermore Just Dropped Important Fantastic Beasts and Where to Find Them News. One Name Stands Out.
Next Up: Editor's Pick