President Donald Trump warned of “the calm before the storm” while posing with a group of military leaders at the White House Thursday.

“You guys know what this represents?” Trump said to a group of reporters while photos were being taken, according a pool report. “Maybe it’s the calm before the storm.”

When asked what he meant, Trump replied, “You’ll find out.”

Trump’s remarks occurred during a photo opportunity with senior military officials and their spouses on Thursday night. At the White House, Trump held a briefing with those leaders and a dinner afterward with them and their spouses. According to a transcript of the briefing, Trump mentioned several issues of national security facing the U.S.

“Recently, we have had challenges that we really should have taken care of a long time ago, like North Korea, Iran, Afghanistan, ISIS and the revisionist powers that threaten our interests all around the world,” Trump said. “Tremendous progress has been made with respect to ISIS, and I guess the media is going to be finding out about that over the next short period of time.”

Amid anonymously sourced reports on Thursday that Trump plans to “decertify” the Iran nuclear deal next week, the President said the U.S. “must put an end to Iran’s continued aggression and nuclear ambitions.”

“They have not lived up to the spirit of their agreement,” he added. “And we will be discussing that tonight.”

Trump did not clarify his comments when a reporter asked if he was referring to either Iran or ISIS.

Due to their cryptic nature, Trump’s comments had some people on social media expressing confusion, fear and bafflement. 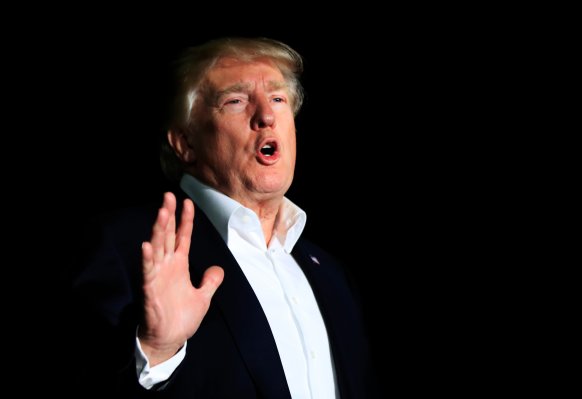