The Fearless Girl may have to teach its creators a thing or two.

State Street, the Boston-based financial services company that installed the statue of a young girl challenging the Charging Bull on Wall Street earlier this year, agreed to pay a $5 million settlement to more than 300 high-level female employees who, the U.S. Department of Labor found, were paid less than their male coworkers.

The settlement comes as a result of a 2012 audit conducted by the Department of Labor that found an issue of pay disparity in the company. The settlement will also address allegations that the company was paying black executives less than their white counterparts.

State Street has denied any pay discrimination for both its female and black employees, according to the Labor Department. In a statement to Fortune, the company said it is “committed to equal pay practices” and regularly evaluates if its practices are “nondiscriminatory.”

“While we disagreed with the [DOL’s] analysis and findings, we have cooperated fully with them, and made a decision to bring this six year-old matter to resolution and move forward,” the company said.

State Street has touted female empowerment and representation in the workplace, but may not have done so as often in practice. Bloomberg found that the company agreed to two out of 11 shareholder proposals related to gender pay in 2017.

The Fearless Girl was installed as a promotion for SHE, a State Street exchange-traded fund that invests in businesses focused on gender diversity. A plaque next to the statue advertising the investment product was removed soon after it was installed and replaced with a new one after the New York City Department of Transportation made it part of its public art project. 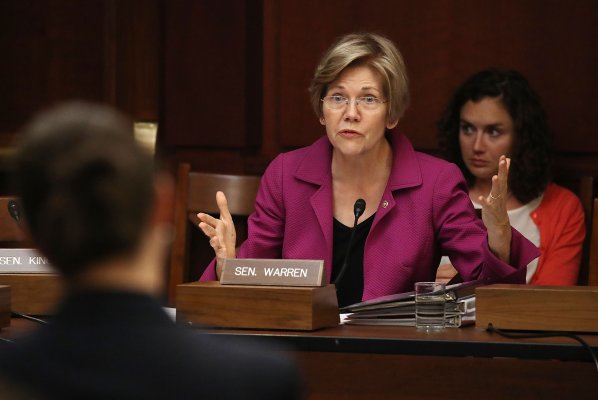 'You Should Be Fired.' Elizabeth Warren Slams Wells Fargo CEO Over Fake Accounts
Next Up: Editor's Pick