7 Questions You Were Too Embarrassed to Ask About Halloween

Halloween is almost here, which means you don’t have much time to figure out this year’s costume — or grab a bag of candy for trick or treaters (or yourself).

But the holiday’s traditions, like planning Halloween costumes, buying Halloween candy and ringing doorbells to trick or treat, indeed have a long-standing history. From Halloween’s Catholic and Celtic backgrounds to what the most popular Halloween costumes of 2021 are, we’re here to answer all your burning questions.

This is everything you need to know about Halloween, including how and why we celebrate it.

Halloween is typically celebrated as a secular holiday in the U.S. Many people celebrate Halloween by dressing up in costumes ranging from their favorite character in a movie, a pop culture reference or their favorite animal (more on that below). Some people, often children, will spend the evening hours of the holiday trick or treating for candy.

Halloween falls on Oct. 31 each year. Halloween 2021 lands on a Sunday.

This year, October also had a Friday the 13th, which is considered by some to be unlucky, according to American folklore. While the history of how Friday the 13th came to be considered unlucky isn’t completely clear to some historians, others like Dr. Phil Steven, an anthropology professor at the University of Buffalo, believe it comes from the Last Supper, where 13 people sat together.

Why do we celebrate Halloween?

The earliest origins of Halloween can be difficult to trace. Some, like Halloween expert and author Lesley Bannatyne, link the holiday to the Celtic celebration of Samhain. The day marked “the turning of the year,” noted Bannatyme, author of Halloween Nation.

However, others such as historian Nicholas Rogers, a professor at York University, say there are actually no traditions carried over from the festival.

“The reason people think it’s related to Halloween is because when you go to look at Irish Folklore Commission of the 1940s, Samhain and Halloween and a number of other words are used interchangeably to describe the end of October,” Rogers said, adding that both celebrations have supernatural and magical elements associated with them.

Both Bannatyne and Rogers noted Halloween as we know it today has much more direct connections to the Christian holiday of All Saint’s Day, which ended up falling on Nov. 1, after a series of date changes.

What does trick or treat mean?

On Halloween night, children can be heard saying “trick or treat” after ringing their neighbors’ doorbells in hopes of getting some candy.

On All Saint’s Day, and other Christian holidays, people would go door to door giving prayers in exchange for treats, Rogers said. The practice became popular in America as an effort to stop vandalism and mischief. Bannatyne notes that in the 1940s, people tried hosting parties to discourage the mischief and when that didn’t work, homeowners began meeting children with their lights on and giving out candy or money. “It was a whole campaign on how to trick or treat,” Bannatyne said. “Then it caught on.”

How old is too old to trick or treat?

There’s no specific cutoff age for trick-or-treating in most places, though Food & Wine notes that some towns are actually making rules that give trick-or-treaters a cut-off age.

Lizzie Post, co-president of the Emily Post Institute, which gives advice on etiquette, says the most important thing is ensuring that younger children are given the priority when trick-or-treating on Halloween. “You want to make sure younger kids are getting the chance and the opportunity, but I don’t want to discourage teens from enjoying this as long they’re behaving well,” Post told TIME.

What are the most popular Halloween costumes this year?

Movies are lending a lot of costume inspiration this year. Wonder Woman is the most-searched Halloween costume on Google followed by Suicide Squad‘s Harley Quinn, the super villain that appears in DC comics; a clown; and Disney heroine Moana. A Unicorn was the fifth-most searched Halloween costume on Google. The most popular couple’s costumes are Bonnie and Clyde, Beauty and the Beast, Forrest Gump and Jenny, Lilo and Stitch, and Tarzan and Jane, according to Google.

Pennywise, the clown from Stephen King’s thriller IT, was listed as a top costume choice by Lyst and Pinterest following the movie debut earlier this year (one of TIME’s best Halloween movies of 2017). Television-inspired Stranger Things characters were the second most popular, according to Lyst and Pinterest, and Beauty and the Beast characters were the third-most popular.

What is the most popular Halloween candy this year?

So far, the leading treat on Google’s searches is doughnuts. Doughnut chains Dunkin Donuts and Krispy Kreme recently unveiled Halloween-themed treats like a special Boston Scream doughnut at Dunkin and spider and mummy doughnuts at Krispy Kreme. Among the more traditional Halloween candy options, M&M’s are the second-most searched on Google followed by candy corn, candy bark and chocolate.

Candy corn was also a favorite in Idaho, New Mexico, Michigan, Alabama, South Carolina and Rhode Island, according to sales data from Candystore.com from 2007 to 2016. But Skittles, Reese’s Cups and M&M’s made up the most popular candies across the country, selling millions of pounds annually, according to the data. 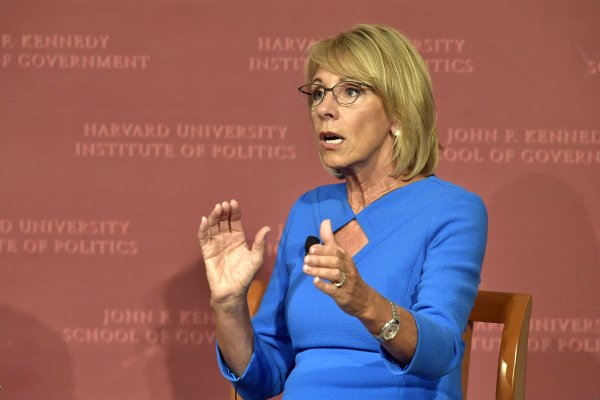 'We Will Keep Suing.' 17 States Slam Betsy DeVos for Blocking Rules on For-Profit Colleges
Next Up: Editor's Pick